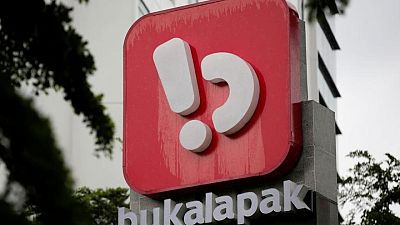 By Anshuman Daga and Fransiska Nangoy

The listing comes at a time when the pandemic has boosted demand in Indonesia’s $40 billion e-commerce market. Bukalapak has sought to focus on smaller clients as it competes with bigger rivals Tokopedia, Sea Ltd’s Shopee and Alibaba’s Lazada.

Two sources familiar with the deal said a spate of orders from large investors meant the books for Bukalapak’s IPO were covered across its indicative price range.

The sources declined to be identified as they were not authorised to speak to the media.

Until a few months ago, Bukalapak, the No.4 e-commerce company, was looking to raise just $300 million. That grew to $800 million and this week it expanded the offer again, by 25%, as investors clamoured for a piece of the company.

“As the first tech unicorn to launch an IPO in Indonesia, the hype, especially from retail investors, is quite high”, said Rudiyanto, a director at Panin Asset Management in Jakarta. A unicorn is a private startup firm that achieves a $1 billion valuation.

Bukalapak, whose name means ‘opening a kiosk’ in Indonesian, is aiming to raise up to $1.13 billion by selling as much as 25% of its enlarged capital. It is marketing the shares between 750 and 850 rupiah apiece.

It is seeking a valuation of up to $5.6 billion, double the level two years ago, and is backed by Singapore sovereign investor GIC, Ant Financial, local media conglomerate Emtek and Microsoft.

The books for the IPO are open until July 19, when the share price will be set. The company is set to make its market debut on Aug. 6.

Bank of America and UBS are the joint global coordinators and bookrunners with Mandiri.

“Our business is focused on micro, small and medium-sized enterprises. They are the prime movers in the Indonesian economy,” Bukalapak CEO Rachmat Kaimuddin told an online briefing for investors.

“The opportunity to digitalise them and cater to underserved markets, especially outside the big cities, is very promising.”

Around 30% of Indonesia’s e-commerce transactions were estimated to have occurred in second-tier cities last year, but that share is seen rising to 48% by 2025, he added.

Over 60% of the IPO proceeds will be used to invest in the business, which had revenue of $95.8 million in 2020 and more than 100 million users. The rest will be used to expand Bukalapak subsidiaries.

With a population of 270 million, Indonesia has one of the world’s fastest-growing online shopping sectors and is home to many startups.

GoTo, the merged entity of Tokopedia and ride-hailing and payments firm Gojek, is also planning an IPO. Sources have said GoTo is looking to raise at least $2 billion in pre-IPO funding in the next few months, which will be followed by a local listing.

“This will also be like testing the water for the upcoming IPO of GoTo,” said Rudiyanto of Bukalapak’s IPO.

Bukalapak and GoTo’s debuts will turbocharge Indonesia’s long lacklustre IPO market, which stagnated further during the pandemic. Money raised via IPOs more than halved in 2020 to $470 million, according to Refinitiv data.