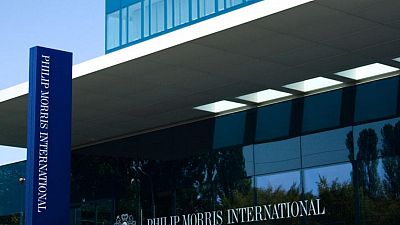 The move by Philip Morris is the latest push by big tobacco companies to change their image following years of negative press and lawsuits for marketing and selling cigarettes, a product that health advocates and experts say continues to be a leading cause of preventable deaths worldwide.

The offer of 150 pence per share to investors in Vectura topped a previous 136 pence proposal by investment firm Carlyle Group, and was 11% higher than the drugmaker’s closing share price on Thursday.

Vectura, whose shares rose as much as 14% to 154 pence, said it was withdrawing its recommendation for Carlyle’s proposal and was adjourning a shareholder meeting it had convened on Monday.

Philip Morris aims to use Vectura’s expertise with inhalable formulations and device design to produce a range of over-the-counter and prescription-based respiratory therapies, it said in a statement.

It has set a target to generate more than 50% of its revenue from smoke-free products and at least $1 billion from products beyond nicotine by 2025 as part of its “evolution into a broader healthcare and wellness company”.

Vectura makes approved inhaled medicines and associated devices to treat respiratory illnesses such as asthma, and counts Novartis AG and GlaxoSmithKline Plc among its customers.

“On the one hand Phillip Morris’ determination to accelerate the end of smoking might seem like turkeys voting for Christmas but as more and more people shift to ‘healthier’ lifestyles they would have eventually found themselves obsolete,” AJ Bell financial analyst Danni Hewson said.

“The move to scoop up Vectura from under the nose of Carlyle is part of a carefully thought out shift to smoke free products and investing in devices that will make lives better for people suffering from respiratory problems and gives good PR.”

Carlyle said it was “considering its options and a further announcement will be made in due course”, raising the prospect of a bidding war. In the meantime, it encouraged Vectura shareholders to take no action.

Other tobacco majors British American Tobacco (BAT) and Altria have also set ambitious targets to switch customers from smoking to less harmful e-cigarettes, cannabis and tobacco-heating products but with varying degrees of success.

While BAT is seeing a benefit from more smokers switching to its e-cigarettes, Altria Group has seen its $12.8 billion investment in e-cigarette maker Juul Labs nosedive after regulators started taking a much harder stance on vaping products. Altria on Friday also announced it was selling its wine business.

Winston cigarette maker Imperial Brands Plc, in contrast, has scaled down its ambitions with vaping devices and other alternative nicotine products, and is doubling down on cigarettes as it embarks on a five-year turnaround plan.

The deal is Philip Morris’ second acquisition in the past week, after agreeing to buy nicotine gum maker Fertin Pharma for 5.1 billion Danish Krone ($812 million).

The U.S. company said Vectura will operate as an independent unit and will be the backbone of its inhaled therapeutics unit.