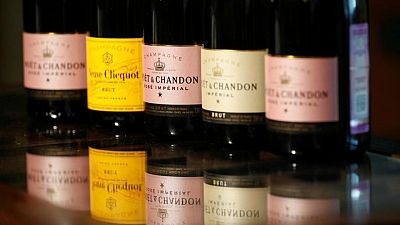 By Elizabeth Pineau and Clotaire Achi

URVILLE, France – French champagne producer Michel Drappier loves Russian customers: he sells them thousands of bottles every year, the national airline serves his brand in business class, and it was on the menu when Vladimir Putin visited France.

But Drappier worries a new Russian law on labelling imported champagne will undermine the principle he holds sacrosanct, that only champagne produced in France’s Champagne region is worthy of the name.

“The word ‘champagne’ is magical,” Drappier, 62, said at the vineyard that has been in his family for seven generations. “We have to fight so that our name is recognised, and not diluted,” he said, standing above dusty wine cellars that date back to the 12th century.

Russia has adopted legislation which will require French producers to attach a label to the back of their bottles sold in Russia with the description “sparkling wine.”

By contrast, domestic producers of what is known in Russia as “shampanskoye” will not have to attach any such label. Shares in a leading Russian producer went up after the law came into force.

In more than 120 countries, the name “champagne” has protected status, reserving its use for sparkling wine from France’s Champagne region.

“It’s the world turned upside down,” said Drappier, who took over the business from his 95-year-old father, and works alongside his three children.

“The Russians are putting ‘Champagne” on their labels and we’re not allowed to.”

The French government has promised to react and warned it could seek redress through the World Trade Organisation.

“The champagne community is in shock,” Charles Goemaere, head of the producer’s lobby, told Reuters. He said Russia accounts for sales of about 2 million bottles per year for his members.

Drappier’s vineyard, about 230 km (143 miles) south-east of Paris, has been in his family since 1808. The Elysee Palace, official residence of the French president, is one of Drappier’s customers.

On the wall of the family home hangs a menu from the 2003 Group of Eight summit in Evian, southern France, when Drappier’s champagne was served to Putin, along with other world leaders.

Drappier is now dealing with the logistical headache of getting the labels changed on the next consignments heading for Russia to add the term “sparkling wine.”

But he is more worried that the Russian move could be the thin end of a wedge.

“It could give ideas to countries,” he said. “There will be Argentinian or Korean champagne, and in the long run that will be dangerous for us.”

“It’s the consumer who will be fooled. Is he drinking champagne, or Asian sparkling wine?.”

“The whole world has recognised champagne as a global treasure. Those who want to attack it are kind of swindlers, or hooligans, who want to profit from the name,” he said.