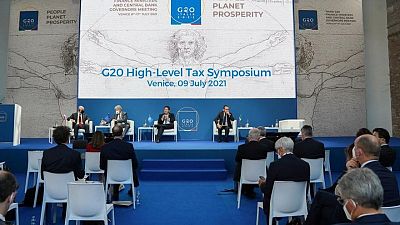 VENICE – COVID-19 is probably only a forerunner of increasingly dangerous pandemics in the future and governments need to find $75 billion over the next 5 years to prepare for them, a panel of experts told finance ministers of the Group of 20 rich countries on Friday.

In a report to the G20 meeting in Venice the panel said the $15 bln per year of investments it recommended doubled current spending levels but was “negligible” compared with the costs of another major outbreak of a new contagious illness.

Summers told Reuters in an interview he was “guardedly optimistic” its recommendations would be implemented and said “we won’t be reluctant to speak out” if they are not.

“Spending tens of billions of dollars could save tens of trillions,” he said.

The report, titled “Global deal for a pandemic age”, called for the creation of a $10 bln annual Global Health Threats Fund, plus $5 bln to strengthen the World Health Organization and create dedicated pandemic facilities at the World Bank and multilateral development banks.

In addition, low and middle-income income countries would need to add about 1% of gross domestic product to public spending on health over the next five years, it said.

“Achieving safety from pandemics will require a basic shift in thinking about international cooperation,” said Shanmugaratnam. “It is the ultimate case for both national self-interest and international solidarity at the same time.”

The panel was set up in January and includes prominent names such as former European Central Bank chief Jean-Claude Trichet, Ana Botin, executive chairman of the Santander group, and Guntram Wolff, head of the Bruegel think-tank.

The G20, chaired this year by Italy, will consider its recommendations in the lead up to a joint finance and health ministers’ meeting in October.

Okonjo-Iweala told Reuters the finance ministers had been “generally very positive” about the report and she was confident it would be taken forward.