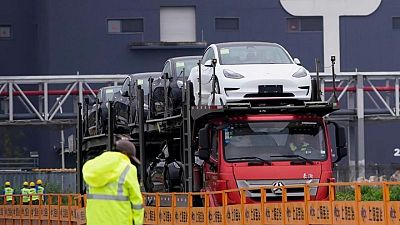 BEIJING – U.S. electric vehicle maker Tesla Inc on Thursday introduced a cheaper version of the Model Y in China, where it faces increased scrutiny from both regulators and the public and growing competition from local rivals.

The company, which makes Model 3 sedans and Model Y sport-utility vehicles in Shanghai, sold 33,155 China-made vehicles, including those for export, compared with 33,463 in May.

Domestic sales in China improved, however, with Tesla selling 28,138 China-made cars in June, up from 21,936 the previous month.

Tesla shares fell 1.2% on Thursday and were set to decline for a third consecutive session.

The standard-range Model Y launched on Thursday has a starting price of 276,000 yuan ($42,588), after government subsidies are taken into account, about 20% less than a long-range Model Y.

The price cut allows its base Model Y to benefit from the subsidies, which are offered to new energy vehicles priced below 300,000 yuan.

Tesla dropped a standard-range Model Y from its U.S. website last year, as CEO Elon Musk said the range was “unacceptably low” at less than 250 miles.