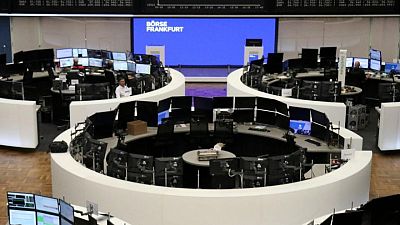 -European stocks sank on Thursday, posting their worst session in two months with all sectors in the red as concerns about the resilience of economic recovery sent investors fleeing to bonds.

The pan-European STOXX 600 index dropped 1.8% [MKTS/GLOB], with a European Central Bank move to shift its inflation target to 2% from “below but close to” that figure seen as dovish and doing little to cap declines.

“With low inflation even more entrenched in the euro zone, this change from the European Central Bank means policy will remain loose for even longer.”

Euro zone banks slid nearly 3% as government bond yields extended their falls. While many investors struggle to fully grasp the triggers behind the global bond rally, a broad rethink of the reflation narrative and a sense that economic growth may have peaked are common explanations, together with hedge funds unwinding bets gone wrong. [GVD/EUR]

The day’s slide pushed the STOXX 600 into negative territory for the month, putting it on course to break a five-month winning streak. It is now 2% away from record highs. Until Wednesday, the index was only off 0.2% from the peak of 460.51.

Deteriorating economic indicators from the continent as well as United States and China, have dented sentiment lately, with the rise in coronavirus cases as well as the spread of a new variant spelling more trouble as countries scramble to curb its spread.

Miners were down 2.8%, while automakers fell about 2.3% as BMW and Volkswagen slipped after the European Union fined them a total of $1 billion for emissions cartel.

Dutch technology investor Prosus, which has a 29% stake in Chinese tech giant Tencent, fell 4.1% as the sector came under pressure globally.

British food delivery company Deliveroo rose 2.3% after it posted 88% jump in orders during the June quarter.