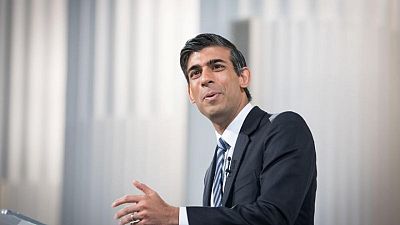 LONDON -British finance minister Rishi Sunak said this year’s increase to the state retirement pension – which could be pushed up sharply by statistical distortions caused by the COVID pandemic – needed to be fair to taxpayers as well as pensioners.

His comments hinted at a possible weakening of an automatic link with earnings.

Sunak’s Conservative Party promised before a national election in 2019 to raise pensions each year by the highest rate out of inflation, wage growth or 2.5%, known as the triple lock.

But distortions to the job market caused by COVID and furlough support mean one key measure of wage growth could rise by 8% this year.

“The triple lock is government policy, but I recognise people’s concerns about what that (increase) might be, given some of the numbers that are being put around,” he told the BBC.

“Our approach to these things will be driven by fairness, fairness both for pensioners and for taxpayers,” he added.

Average weekly earnings – the main pay growth measure from Britain’s Office for National Statistics – rose by 5.6% in the three months to April.

Britain’s budget watchdog on Monday pencilled in an 8% rise in wages for the three months to July, when the increase in the following year’s pension payment is normally calculated, costing almost 8 billion pounds ($11 billion).

The rate of increase reflects the fact that millions of employees were on reduced furlough pay last year, and also that lower-paid staff had been more likely to lose their jobs, pushing up the average pay level for the remaining workforce.

The ONS said that stripping out these effects, underlying pay growth was currently around 3%, much closer to its long-run average.

Sunak declined to comment on whether an 8% rise in pensions would be appropriate at a time when the government is preparing to cut its main support programme for the poorest working and unemployed Britons by 20 pounds a week.

The Resolution Foundation think tank – which focuses on issues affecting the low-paid – said Sunak would do better to tie increases in the state pension to a longer-term measure of earnings growth.