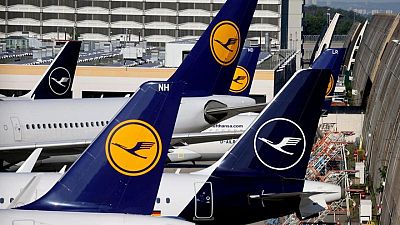 – German airline Lufthansa raised 1 billion euros ($1.2 billion) in a corporate bond sale on Wednesday, boosting its finances after a state bail-out due to the COVID-19 pandemic.

Lufthansa, which was hit hard by the ensuing tourism crisis, had already issued a bond in February to repay part of last year’s 9 billion euro bailout from state lender KfW.

“The repeated successful placement of a corporate bond again confirms our access to a variety of advantageous financing instruments,” finance chief Remco Steenbergen said in a statement.

The company said it issued three and eight-year bonds, confirming an earlier Reuters report that cited a memo from a lead manager on the deal, becoming the latest of several major airlines to tap the debt markets.

The shorter-dated tranche received demand of over 900 million euros and the longer one 1 billion, according to the memo.

Among Lufthansa’s peers, Air France-KLM, easyJet, British Airways owner IAG and Ryanair have all sold bonds this year as COVID-19 vaccinations have supported a brighter economic outlook and better prospects for the travel sector.

Lufthansa said it would use the proceeds to strengthen its liquidity. Citi, Credit Suisse, HSBC and ING managed the transaction, according to an earlier memo.

Reuters reported in May that Lufthansa was sounding out investors about a capital increase worth roughly 3 billion euros, looking at either a June/July or September/October window, after shareholders approved a potential increase of up to 5.5 billion.

The company said on Wednesday preparations for a share sale were underway, adding no decision on the size and timing had been taken.