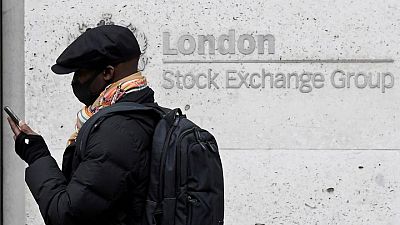 – London’s FTSE 100 marked its worst session in nearly three weeks on Tuesday, dragged down by commodity-linked and bank stocks, while a stronger pound weighed on export-oriented companies.

The blue-chip index dropped 0.9%, pulled down by miners, energy and major banking stocks.

Dollar-earnings consumer staples companies Unilever, Diageo, and British American Tobacco were among the biggest drags on the export-heavy index as sterling hit over a week’s high against the dollar.

“High levels of public debt are more vulnerable than ever to rising interest rates but failure to spend to deal with issues such as Covid scarring and meeting climate targets brings its own costs.”

The FTSE 100 has gained nearly 10% so far this year on government stimulus support and record low interest rates but has largely underperformed its European and domestic mid-cap peers and continues to be one of the lowest valued markets.

British online grocer and technology group Ocado slipped 4.2% despite the company saying the demand for its grocery business and technology remained strong after it announced a 20% rise in first-half retail revenue.

Miners including Rio Tinto, Glencore, Anglo American and BHP fell between 2.2% and 2.8% and were the biggest drags.

Private equity firm Bridgepoint said it would list on the London Stock Exchange to raise 300 million pounds ($417 million) to support its growth plans as the sector revs up.