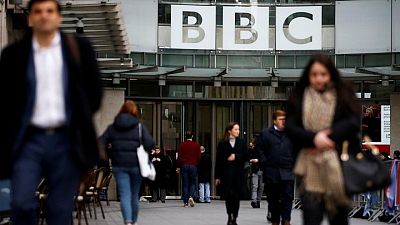 LONDON – Britain’s BBC said it had cut spending on its top stars by 10% and reduced its total public sector workforce by over 1,200 in the last financial year, becoming leaner even as the COVID-19 pandemic disrupted production and demand for news soared.

The broadcaster, which is funded by a licence fee paid by all TV-watching households, currently 159 pounds ($220), is facing increasing competition from video-on-demand services like Netflix and political scrutiny of its output, particularly news.

The amount its pays its talent has long been a focus of criticism.

Its highest paid presenter remained Gary Lineker, the “Match of the Day” host who is currently anchoring BBC‘s Euro 2020 coverage, on between 1,360,000 and 1,364,999 pounds. That is down from 1.75 million pounds after he signed a new contract.

BBC Director General Tim Davie said Ball had volunteered to take a pay cut, which would be reflected in full this year. Her pay this year will be 980,000 pounds, the BBC said.

He said millions of viewers had turned to the broadcaster for news during the pandemic, with its six o’clock bulletin recording the highest viewing figures in 20 years.

“Our news coverage is the first port of call for the vast majority of the country,” he told reporters, adding that 40% of people named the BBC first for impartial news, way ahead of competitors, but it needs to do more.

“As we reach more people with our news, we’ve got more people to convince impartiality is what we are all about,” he said.

Chairman Richard Sharp, a former Goldman Sachs banker who joined in 99-year-old broadcaster in February, said he believed the strategy was correct.

“While there is more work to do – particularly around impartiality which the BBC has to get right – the BBC is on the right path,” he said.