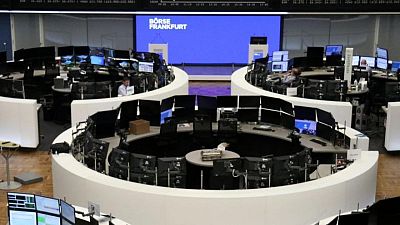 By Sagarika Jaisinghani and Susan Mathew

– Upbeat eurozone business activity saw European shares reverse session losses on Monday, leaving them just about half a percent away from all-time peaks, while a nearly 12% surge in Morrisons sent London mid-caps to record highs.

The surge came at the cost of mounting inflationary pressures.

But “(as) higher prices still seem to reflect temporary shortages, there is good reason to expect headline inflation to drop back sharply in 2022 as base effects are reversed and shortages ease,” said Jessica Hinds, a Europe economist at Capital Economics.

Banks, material stocks and travel shares led gains on the day. Trading volumes, however, were subdued with U.S. markets closed for an extended 4th of July weekend.

In London, the blue-chips index hit over two-week highs, with eyes on British Prime Minister Boris Johnson was due on Monday to set out plans to end social and economic COVID-19 restrictions in England.

Morrisons jumped to a near eight-year high after U.S. private equity company Apollo Global Management became the third suitor for the British supermarket group, saying it was considering a possible offer. Morrisons on Saturday agreed to a 6.3 billion pound ($8.7 billion) takeover with another group.

“Perhaps interested parties only made their move once they could see that UK assets were becoming more attractive to overseas investors,” said Russ Mould, investment director at AJ Bell.

The broader STOXX 600 benchmark has struggled to reclaim an all-time high hit in mid-June as the jump in virus cases raised the spectre of new travel restrictions, while a recent spike in inflation has sparked fears of a quick tapering in monetary stimulus despite assurances to the contrary from the ECB.

After the central bank kept its policy unchanged last month, ECB President Christine Lagarde said on Friday the euro zone economy was beginning to rebound from the pandemic-induced slump, but the recovery remained fragile.

France’s Health Minister Olivier Veran warned the country could be heading for a fourth wave of the pandemic due to the Delta variant. French shares lost ahlf a percent before ending the day up 0.2%.