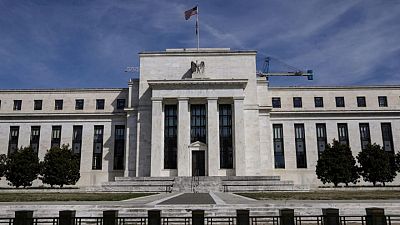 NEWYORK – Investors have been struggling to interpret signals from the Federal Reserve about how hot it is willing to let inflation run before it begins unwinding pandemic-era monetary stimulus.

Measures of markets’ U.S. inflation expectations hit multi-year highs in mid-May, but fell after comments from some Fed speakers and minutes from the committee’s April meeting sounded more hawkish.

Some investors interpreted that as policymakers having a lower tolerance for an inflation overshoot than previously estimated.

The fall in inflation expectations was exacerbated by the central bank’s policymaking meeting on June 15-16, when the Fed pulled forward projections for its first two rate hikes into 2023. Since then, bets on inflation have nudged back up, likely helped by Fed Chair Jerome Powell’s insistence on Tuesday that the bank would not preemptively raise rates because of the “fear” that inflation may be coming.

The choppiness suggests investors are struggling to make sense of the sometimes conflicting signals from Fed officials, who are facing their first inflation test under a new flexible average inflation framework adopted in 2020.

“There is a lot of uncertainty among bond investors about what exactly has changed since the Federal Open Market Committee (FOMC)” met last week said Tom Graff, head of fixed income at Brown Advisory.

“Some are arguing that the Fed lost its nerve after a couple of inflation prints and won’t ultimately follow through with allowing inflation to stay above 2%.”

Breakeven inflation rates on five- and 10-year Treasury Inflation-Protected Securities (TIPS) have fallen around 25 basis points since hitting 10- and eight-year peaks in May, respectively.

The five-year, five-year forward breakeven inflation rate, which tracks the expected rate of inflation over five years in five years’ time, was recently at 2.2%, below the seven-year high of 2.4% it reached in May. Those measures have rebounded slightly in recent days.

The personal consumption expenditures price index (PCE) – the Fed’s preferred measure for inflation – rose 3.6% in April from a year earlier.

Last August, the Fed adopted a flexible average inflation target (FAIT) that is designed to be somewhat more forgiving to price pressures than in the past, a major shift to the central bank’s approach towards its dual role of achieving maximum employment and stable prices.

Some market participants say the Fed may be less committed to FAIT than when it adopted the policy last summer https://www.federalreserve.gov/newsevents/speech/powell20200827a.htm, when Powell said the central bank would allow prices to rise faster than would have been tolerated in previous cycles.

“We might have some inflation for now but on a structural basis, this reaction function from the Fed is likely to once again lead to a persistent undershoot,” said Pond.

But not everyone agrees that the Fed’s commitment is wavering.

“I think some people think the Fed is changing tune and abandoning flexible average inflation targeting. I don’t agree, but clearly some people are putting that trade on,” said Graff.

Powell’s argument has been that this year’s spike in inflation is transitory and related to the reopening of an economy shuttered by the coronavirus pandemic.

The Fed’s more hawkish stance at last week’s meeting surprised some market participants because the bank’s inflation forecasts a few years out had not changed dramatically.

The median Fed voter https://www.federalreserve.gov/monetarypolicy/files/fomcprojtabl20210616.pdf in June expected PCE to rise to 3.4% this year, compared to 2.4% in March. Projections for 2022 and 2023 were 10 basis points higher.

Market participants, weighing on every word from Powell at his address on Tuesday, did not have a clear takeaway.

Kathy Bostjancic, chief U.S. financial economist at Oxford Economics, said that Powell this week “re-emphasized that they have the tools to bring inflation down.”

“And while I think he was still overall sanguine about the outlook, he did say (they) were surprised about how large and persistent it (inflation) was.”