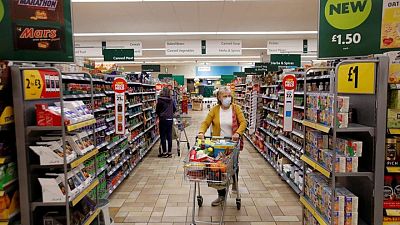 LONDON – British supermarket sales fell 1.6% in the 12 weeks to June 13 year-on-year as the re-opening of indoor hospitality took spend away from the grocers and into the nation’s cafés and restaurants, industry data showed on Tuesday.

Market researcher Kantar said, however, that sales in the period were still 3.3 billion pounds ($4.6 billion) higher than in 2019 before the pandemic hit.

It said Britons enjoyed the long awaited arrival of summer in the latter four weeks of the period, with take-home sales of alcohol increasing by 29 million pounds compared to May, despite pubs and restaurants being open, helped by the May Bank Holiday and the lead up to the European soccer championship which kicked off June 11.

Of Britain’s big four grocers, Sainsbury’s, with sales up 0.4% over the 12 weeks year-on-year, was the only one to register growth.

Sales at market leader Tesco were down 0.8% and at Asda and Morrisons, they were down 0.6% and 1.5% respectively.

In contrast discounters Aldi and Lidl saw sales growth of 6.6% and 4.9% respectively, with Aldi’s market share hitting 8.2%, matching its highest ever in March 2020.

Kantar said online sales accounted for the same proportion of the market, 13.4%, in the four weeks to 13 June as they did in last month’s data set, suggesting the appetite for large online shops is approaching a new baseline.

Kantar said grocery prices fell 1.9% over the 12 weeks. It said prices are rising fastest in markets such as chocolate, canned colas and savoury snacks while falling in fresh bacon, toilet tissues and ambient cooking sauces.