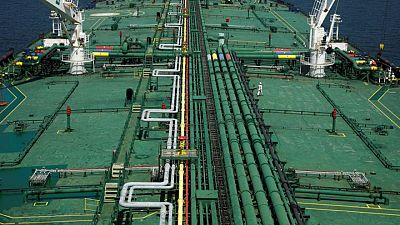 NEWYORK -Oil prices soared on Monday, gaining on a pause in talks to end U.S. sanctions on Iranian crude, and as the dollar retreated from two-month highs.

Both benchmarks have risen for the past four weeks on optimism over the pace of global COVID-19 vaccinations and expected pick-up in summer travel. The rebound has pushed up spot premiums for crude in Asia and Europe to multi-month highs.

Bank of America said that Brent crude was likely to average $68 a barrel this year but could hit $100 next year on unleashed pent-up demand and more private car usage.

Oil was boosted by a weaker U.S. dollar, which can send speculative investors into greenback-denominated assets like commodities. [USD/]

“The election of a hardliner in Iran is weighing on market (supply) as sanctions look less likely to be lifted,” said Bob Yawger, director of Energy Futures at Mizuho in New York.

A deal could lead to Iran exporting an extra 1 million barrels per day, or 1% of global supply, for more than six months from its storage facilities.

Additionally, oil prices have drawn support from forecasts of limited growth in U.S. oil output, giving the Organization of the Petroleum Exporting Countries more power to manage the market in the short term before a potentially strong rise in shale oil output in 2022.