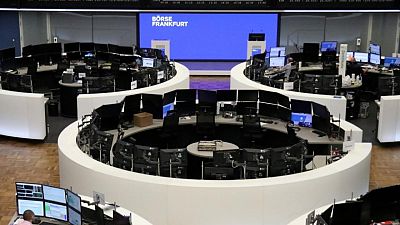 The pan-European STOXX 600 index ended 0.7% higher at 455.23 points after falling to its lowest since June 3 earlier in the session. The index also marked its best day in nearly three weeks.

Automobile and chemical stocks were the top gaining sectors, while basic resources surged 1.3% from a near three-month low.

Her comments helped markets move further past concerns over policy tightening by the Federal Reserve, which had cut short a four-week rally in European shares.

“We believe the Fed’s new outlook will not translate into significantly higher policy rates any time soon,” BlackRock analysts said in a note.

“Within equities, we have been warming up to cyclical stocks as the (economic) restart broadens globally, as reflected in an overweight call on UK equities and our upgrading of European equities to neutral earlier this year.”

The benchmark STOXX 600 scaled record highs this month after the ECB, in stark contrast to the Fed, said it was premature to discuss tapering its pandemic-era monetary stimulus.

Focus is now on business activity data from across the euro zone, due later in the week, for clues on whether a recent surge in inflation will persist.

Industrial stocks have risen in recent months on positive indicators from manufacturing activity in the bloc.

London’s FTSE 100 rose 0.6%. The Bank of England is expected to keep interest rates at a record low when it convenes on Thursday. [.L]

Shares in Morrisons, Britain’s fourth largest grocer by sales, surged 34.6% to the top of the STOXX 600, after it rejected an offer worth 5.52 billion pounds ($7.62 billion) from private equity firm Clayton, Dubilier & Rice.

Italian-American vehicle maker CNH Industrial rose 0.8% after agreeing to a deal to buy Raven Industries at an enterprise value of $2.1 billion.

German vaccine maker CureVac fell 10.5% after a report said Germany’s financial watchdog was investigating possible insider trading in the firm’s shares, which had tumbled after the biotech firm announced its COVID-19 vaccine proved only 47% effective.