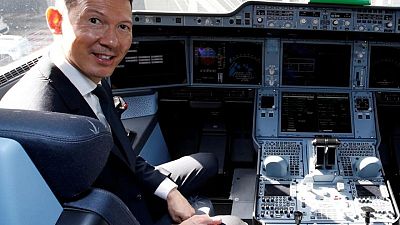 By Laurence Frost and Alexander Cornwell

The suspension of the “use-it-or-lose-it” rule has allowed major carriers to preserve airport access during the coronavirus crisis despite the collapse in traffic, sparking protests from low-cost rivals keen to expand into once-congested airports.

Airlines were required to use 80% of pre-crisis take-off and landing slots or forfeit them to rivals. Major carriers are now pushing to extend a lower threshold and other accommodations through the coming northern winter season.

“It was logical to give airlines a break on the use-it-or-lose-it rule,” Ben Smith said in a joint panel appearance with Varadi at the Paris Air Forum, adding that the time is not right for its return.

“We don’t see our industry in a position yet to put that in place.”

But Varadi, founding CEO of Hungary-based Wizz, said the suspension of slot rules discriminated in favour of state-backed carriers and undermined the European single market. France recently raised its stake in Air France-KLM to 28.6%.

“This is the level of nationalism playing into the game nowadays,” Varadi said. “It’s not only governments getting involved on the equity side of the industry but (also) protecting that investment through various administrative measures, like slots.”

Varadi warned of similar political reflexes in areas such as environmental tax and he clashed again with Smith on European moves to require a minimum percentage of sustainable aviation fuel (SAF), which has lower carbon emissions but higher costs.

The Air France-KLM boss echoed warnings from established airlines that said the application of the so-called SAF mandate to long-haul routes would end up benefiting non-European rivals.

“We don’t want to be put in a position where it alters the level playing field between ourselves and other long-haul carriers,” Smith said.

“Are we responsible for the environment or not?” the Wizz CEO said, urging a “seamless and non-discriminatory” approach to green fuel.

“It shouldn’t be another way of further distorting the market by putting legacy carriers in a better situation.”