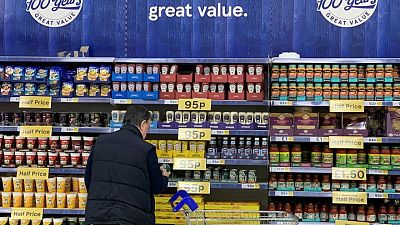 LONDON -Tesco’s sales growth has slowed sharply since the easing of the latest coronavirus lockdown as people start to visit pubs and restaurants again, Britain’s biggest retailer said on Friday.

UK like-for-like sales, excluding fuel and VAT sales tax, rose 0.5% in the 13 weeks to May 29, the group’s fiscal first quarter – ahead of analysts’ average forecast for a fall of 1.0%, but down from growth of 8.8% in the previous quarter.

Against the same quarter in 2019, before the pandemic impacted trading, UK like-for-like sales were up 9.3%.

“We continued to benefit from more people eating at home, although this started to slow down through the quarter as hospitality reopened,” CEO Ken Murphy told reporters.

There were changes in what people were buying too.

General merchandise and clothing like-for-like sales were up 10.3% and 52.1% year-on-year respectively, as people got ready to socialise again.

Murphy said that while sales last year were focused on core grocery products such as pasta, this year customers were treating themselves to items such as Prosecco more.

Tesco, which has a 27% share of Britain’s grocery market, said first quarter online sales were up 22.2% year-on-year and up 81.6% on a two year basis.

Tesco kept its guidance for retail operating profit on a continuing operations basis for the 2021-22 fiscal year to recover to be similar to the 2019-20 outcome.

“While the market outlook remains uncertain, I’m pleased with the strong start we’ve made to the year,” said Murphy.

Rivals Sainsbury’s and Morrisons have also forecast a strong recovery in profits this year as the extra costs of the pandemic reduce.