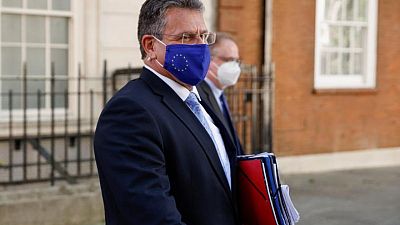 Britain should show “unwavering commitment” to implementing the Northern Ireland protocol, rather than “continually putting it into doubt”, Sefcovic said in a speech at the College of Europe.

Sefcovic said Britain should not make any further unilateral changes to the trading arrangements, as it did in March, and instead favour joint action through joint bodies.

“I welcome that the UK is recognising the value of this approach on one of the outstanding issues, the supply of chilled meats from Great Britain to Northern Ireland because what the protocol truly embodies is trust,” Sefcovic

Britain asked the European Union on Thursday for a further three months to resolve a dispute over whether chilled meat products such as sausages that are made in mainland Britain can be sold in British province Northern Ireland. The EU said it would consider the request.

The European Union does not allow imports of chilled minced meat and “meat preparations”, which include sausages, from third countries, which Britain became after leaving the bloc.

Northern Ireland remains in the EU single market for goods, an arrangement designed to keep the Northern Ireland/Ireland border open and maintain peace. As such, sausages will be barred from mainland UK when a grace period expires at the end of June.

“Everyone around the table understood what this compromise meant in practice,” Sefcovic said. “The EU will not and cannot accept this delicate balance being unilaterally changed or disapplied because of buyer’s remorse.”

Sefcovic said the EU was willing to find creative solutions.

“I agree, as he says, that there is still a ‘window for productive political dialogue and positive results’,” Frost said on Twitter.