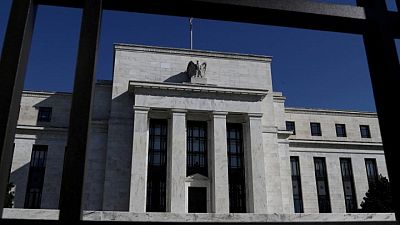 NEWYORK – As the Federal Reserve takes initial steps toward removing its massively accommodative policy, investors are preparing for the main show ahead.

Fed officials on Wednesday penciled in two potential rate hikes in 2023, sooner than policymakers had previously projected, and Chair Jerome Powell edged closer to unveiling plans to taper the Fed’s $120 billion a month of bond purchases. Powell went so far as to describe the two-day gathering as the “talking-about talking-about meeting,” a glib reference to his protestations earlier this year that he and his colleagues were not even “talking about talking about” tighter policy.

“The Fed is making it clear that they will wait and wade through a noisy summer of data to see a trend before they make a decision about liftoff,” said Jason England, global bonds portfolio manager at Janus Henderson.

England expects to see greater bond market volatility leading up to the central bankers’ confab in Jackson Hole, Wyoming, in late August and remains focused on shorter-duration bonds in anticipation of a sustained economic recovery.

The question of when exactly the Fed will pull back has hung over financial markets. Stocks edged lower and the dollar spiked on Wednesday while benchmark yields rose.

“The logical response to today’s information is that interest rates are going to go higher, and they will probably be going higher faster than people may have thought,” said Marcus Moore, assistant portfolio manager at Zeo Capital Advisors.

A more extreme reaction could lay ahead if signs appear of stronger-than-expected inflation and other factors that could push the Fed to taper faster than anticipated, some market participants said. Powell said policymakers are not facing a situation where they are “behind the curve.”

“We have become more defensive because we don’t think the bond market should have so much apathy to inflation,” said Thanos Bardas, co-head of global investment grade and senior portfolio manager at Neuberger Berman.

Consumer prices jumped 5% in May, the largest annual jump in 13 years, while supply bottlenecks recently pushed lumber prices to all-time highs before tumbling 40% from their records.

The Fed’s projections show inflation exceeding the Fed’s 2% target by a wide margin of 3.5% this year.

Todd Thompson, managing director at Reams Asset Management, said wage pressures from a record number of 9.3 million job openings will force the Fed to move more quickly than many in the market anticipate given that real interest rates remain negative.

“With the economy running at a galloping pace, negative real interest rates are a disconnect to reality and that has to be reconciled” through rate hikes, Thompson said.

Ten-year Treasuries, which reflect gains after inflation, trade at a real rate of negative 0.75%.

Douglas Duncan, chief economist at Fannie Mae, said he “would have thought there would have been more commentary” on the Fed’s monthly purchases of $40 billion in mortgage-backed-securities. A recent Reuters poll showed economists expect the Fed could taper those purchases faster than its Treasuries purchases given the red-hot housing market.

Tiffany Wilding, North American economist at PIMCO, said the message from Wednesday’s meeting was that the Fed is “shifting away from managing downside risk to the economy to upside risk to inflation expectations.”

“One thing that came out of this is that maybe their tolerance for above-target inflation is a bit less than we thought,” Wilding said.

The current climate is stirring recollections of 2013 when investors felt blind-sided when then-Chairman Ben Bernanke, in an announcement, raised the idea of a gradual taper. Bond yields spiraled higher, with benchmark 10-year yields surging from around 2% when Bernanke made the comments on May 23 to 3% in early September.

Many don’t expect another tantrum.

Rick Rieder, chief investment officer of global fixed income at BlackRock, wrote that he doesn’t think tapering will create “tangible stress to the economy or markets.” The biggest risk to markets, he said, “would be an overheating paradigm where it is hard to predict how high input, or wage costs, could get.”

While Wilding sees the possibility of “a tapering type of announcement as early as September,” she doesn’t see a repeat of the 2013 tantrum.

“That’s not to say that the bond market won’t sell off but we are not worried about a violent selloff,” Wilding said.

For John Lekas, president of Leader Capital, the worry is that the rebound in the U.S. economy may peter out some time next year.

At end of the year we might be entering a tougher economy,” he said. “I think their (the Fed’s) wait-and-see approach makes sense.”