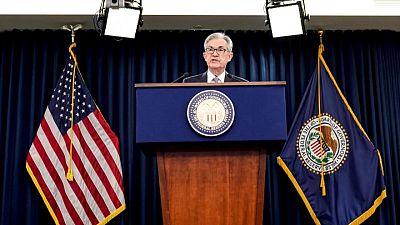 – Federal Reserve officials, increasingly confident the U.S. economy is fast recovering from the pandemic-induced recession, have begun telegraphing an exit from the central bank’s extraordinarily easy monetary policy that so far is smoother and signaled to be speedier than when the reins were tightened after the last crisis.

Though policymakers have yet to agree on a plan, most expect that by the end of 2023 they will have raised interest rates at least twice from the current near-zero level, forecasts published Wednesday show. Eight of the Fed’s 18 policymakers see at least three rate hikes by then.

And though the Fed made no forecasts about its $120 billion monthly bond-buying program – which, along with rock-bottom interest rates, is keeping borrowing costs low and supporting economic growth – policymakers have said they will phase the program out before they begin raising rates.

Following the Great Financial Crisis, it was a full two years from the formal announcement in December 2013 of the bond-buying taper to the first interest rate increase. The taper wrapped up in 10 months and left a still-wobbly economy more than a year to prepare for higher borrowing costs. It was another full year between the first and second rate hikes.

This time, the Fed is most likely seen launching the taper in January, according to a Reuters poll. Getting two rate hikes in by the end of 2023 as the forecasts showed on Tuesday would substantially shorten the runway for the handoff from taper to rates liftoff, and the rate rises also are projected to come more quickly.

That’s not to say the shift in gears, from easing policy to slowly tightening it, is imminent.

The economy, Fed Chair Jerome Powell noted Wednesday, still has “a ways” to go before the economy will have healed enough for the Fed to start paring the monthly bond purchases. And the timing of liftoff isn’t even in the conversation, he said.

The main message from the Fed forecasts, he said, is that “many participants are more comfortable that the economic conditions in the (policy) committee’s forward guidance will be met somewhat sooner than previously anticipated.”

That, he added, “would be a welcome development: If such outcomes materialize, it means the economy will have made faster progress toward our goals.”

It would also be different from the last time around, when the economy as it recovered from the 2007-2009 financial crisis regularly fell short of the forecasts that Fed policymakers penciled in each quarter.

Powell said the Fed would, starting at its meeting next month, begin to assess whether the economy has made enough progress toward its 2% inflation and full employment goals to justify reducing bond purchases, and would be “orderly, methodical and transparent.”

That’s yet another departure from the blueprint the last time.

“In 2013, it was the Fed initiating the conversation about taper, and the markets were taken off guard,” said Ellen Gaske, an economist at PGIM Fixed Income. This time around, she said, “it’s clear that markets and the Fed are in large part on the same page.”

That’s despite the Fed’s forecasts representing such a big turnaround from March, when the bulk of the Fed policymaking committee saw no rate increases until 2024, and most of Wall Street expected the Fed would continue its $120 billion-a-month in asset purchases through at least the end of 2021.

“We still think it would be pretty rushed to see tapering begin before December,” JPMorgan economist Michael Feroli wrote Wednesday.