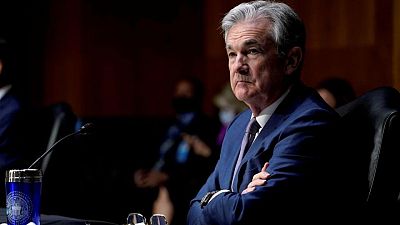 By Jonnelle Marte and Karen Brettell

– The Federal Reserve on Wednesday gave relief to money market investors that have been struggling to find high-quality short-term assets by raising two key short-term rates.

The Fed raised the interest rate it pays banks on reserves held at the U.S. central bank at the end of its two-day policy meeting. It also lifted the rate it pays on overnight reverse repurchase agreements, a tool used to set a floor on short-term interest rates. The technical adjustments are aimed at keeping its key overnight benchmark interest rate from falling too low.

Money fund investors have been borrowing record amounts of Treasuries from the Fed in its reverse repurchase agreement (repo) facility as they struggle with record cash holdings and too few assets to buy.

Banks are flooded with cash as they sell unprecedented amounts of bonds to the Fed as part of the U.S. central bank’s efforts to stimulate the economy. At the same time the Treasury has been curbing sales of Treasury bills to reduce its cash holdings and as the debt ceiling nears.

The rate hikes are “about relieving some of the strains in the front-end of the curve related to a tsunami of cash in the financial system,” said Guy LeBas, chief fixed income strategist at Janney Montgomery Scott in Philadelphia. “Money market funds are finding it hard to get positive yield anywhere and so it addresses some of those problems.”

The rate on reserves – known by the acronym IOER – will rise by five basis points to 0.15%. The rate paid on reverse repo operations, which gives financial firms a place to temporarily park cash in exchange for a return, will increase to 0.05% from zero.

Firms parked a record $583.9 billion in cash with the New York Fed overnight on Monday and stashed about $500 billion overnight with the Fed on both Tuesday and Wednesday.

Treasury bill yields increased after the rate increases, with one-month yields rising to four basis points, from one basis point earlier on Wednesday.

Overnight repo rates increased to around five basis points, from one basis point before the Fed’s move, said an analyst.

The Fed also said it would extend its U.S. dollar liquidity swap lines with nine central banks through the end of the year. Those arrangements were announced in March 2020 to help ease strains in global dollar funding markets.