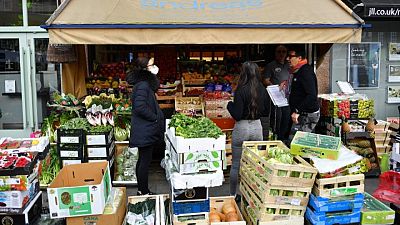 LONDON – British inflation unexpectedly jumped above the Bank of England’s target in May when it hit 2.1%, part of a post-lockdown climb in prices that is expected gather pace.

The acceleration of the consumer price index from April’s 1.5% largely reflected how weak inflation was in May 2020 when the economy was reeling from its first tight lockdown.

The figure represented the first time inflation has gone above the BoE’s 2% target in almost two years and was above all 33 forecasts in a Reuters poll of economists which had pointed to a rise in inflation to 1.8%.

Yields on British government bonds rose early on Wednesday with the yield on two-year gilts – which are sensitive to speculation about BoE policy moves – briefly touching their highest in nearly a month.

Investors around the world are assessing the risks of a sustained jump in prices, especially in the United States where annual inflation hit 5.0% in May, the highest in almost 13 years, and where President Joe Biden has proposed a $6 trillion stimulus package.

“Whether the upside news proves temporary or persistent, it is clearly a hawkish surprise,” HSBC economist Chris Hare said.

“Of course, some major uncertainties, such as the end of the furlough scheme in September, remain. But if the upside surprises continue, calls for a rate rise on the Monetary Policy Committee may grow louder.”

The CPI data showed fuel prices in May were almost 18% higher than a year earlier while clothing and footwear costs rose by 2.1% as people, emerging from their lockdown isolation, bought new outfits.

The price data was collected on or around May 11, before pubs and restaurants were allowed to serve customers indoors and cinemas and hotels reopened from May 17.

The BoE has said it expects inflation to hit 2.5% by the end of this year before settling back to its 2% target as the impact of post-lockdown energy price rises fades along with other cost pressures, such as bottlenecks in supply chains.

Previous surges in inflation since the 2008 financial crisis proved temporary, as the labour market was too weak to create the type of wage-price spirals which occurred in the 1970s.

The central bank is expected to leave policy unchanged on June 24 after its latest meeting.

Jack Leslie, an economist at the Resolution Foundation think tank, said the speeding up of price growth from 0.3% in November to 2.1% in May represented the fastest six-month rise since sterling collapsed after the 2008-09 financial crisis.

“But UK inflationary pressures are different – and nowhere as near as large – as those causing fierce debate in the U.S.,” Leslie said.

Core inflation, which excludes the price of food, energy and other volatile items, rose to 2.0% in the 12 months to May from 1.3% in April, the Office for National Statistics said.

While BoE Governor Andrew Bailey and most of his colleagues say the climb in inflation will be temporary, Chief Economist Andy Haldane said last week the central bank faced the “most dangerous moment” since the European Exchange Rate Mechanism crisis in 1992.

There were signs of further price pressure ahead in Wednesday’s data.

Prices paid by manufacturers for their inputs rose by 10.7% in the 12 months to May, the highest since September 2011, and the prices they charged rose by 4.6%, the biggest increase since January 2012.

House prices in April were 8.9% higher than a year before, slowing from a 9.9% rise in March which was the strongest increase since 2007. The ONS said April’s dip reflected a rush of sales in March when buyers had been expecting the expiry of a cut in stamp duty which has since been extended.