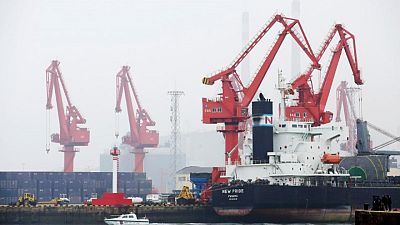 NEWYORK – Oil prices rose for a fifth day on Wednesday, closing in on $75 a barrel as U.S. refiners drew more crude inventories to ramp up activity and meet recovering demand.

Crude inventories fell by 7.4 million barrels in the week to June 11, the U.S. Energy Information Administration said, as refining utilization rose to 92.6%, highest since January 2020, before the pandemic hit.

The inventory draw was stronger than expected, driven as well by exports in another signal of improving demand worldwide.

“With refinery runs over 16 million barrels per day and exports continuing to be robust, it is going to be difficult for inventories to avoid consistent draws as we push on to the peak of summer driving season,” said Matthew Smith, director of Commodity research at ClipperData.

Brent has risen 44% this year, supported by supply cuts led by the Organization of the Petroleum Exporting Countries and allies, known as OPEC+, and the recovery in demand. OPEC+ has reduced last year’s historic supply cuts, but it is still withholding millions of barrels of daily supply from the market.

Executives from major oil traders said on Tuesday they expected prices to remain above $70 and demand to return to pre-pandemic levels in the second half of 2022.

On Wednesday, the U.S. Federal Reserve also brought forward its projections for the first post-pandemic interest rate hikes into 2023.

“The oil complex digested the Fed news quite well in suggesting that some more crude price highs likely lie ahead,” said Jim Ritterbusch, president of Ritterbusch and Associates in Galena, Illinois.

At the same time, the prospect of an imminent rise in Iranian oil exports looks less likely, analysts said. Indirect talks between Tehran and Washington on resuming the 2015 nuclear accord resumed in Vienna on Saturday.