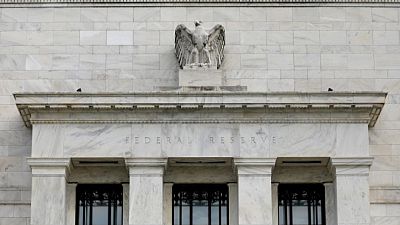 – Investors will be scrutinizing the Federal Reserve’s comments at the close of its policy meeting on Wednesday for insight on whether the central bank has begun discussing tapering bond purchases and if policymakers are concerned about rising inflation. A possible hike to some key short-term rates is also in focus. Here are topics that investors are focused on:

The Fed is keen to minimize the possibility of a market disruption when it begins to reduce its $120 billion per month government bond and mortgage-backed securities purchase program, and so far has only indicated it may soon start “talking about talking” about reducing it.

Market participants will be focused on whether this has advanced in any way, with a reduction in bond purchases expected to be the first step in the Fed’s normalizing its ultra-loose monetary policies.

Signs that the Fed may taper sooner than expected could spark a bond market sell-off, which could hurt risk appetite and send stocks lower.

Many analysts think the Fed will hold off on any announcement on bond reductions until its Jackson Hole economic symposium in August, with the taper unlikely to occur until late this year or early next year. Some market participants, however, are worried there are dangers in waiting as inflation prints come in strong. Graphic: Fed Balance Sheet: https://fingfx.thomsonreuters.com/gfx/mkt/ygdpzxewlpw/Fed%20Balance%20Sheet.PNG

Inflation has been coming in well above the Fed’s 2% target as the economy reopens and investors will be watching for signs that policymakers are uncomfortable with the recent increases.

Data last week showed that consumer prices in May registered the largest annual increase in 13 years, with a 5% gain.

The U.S. Treasury market showed little concern about the data, however, with yields falling to three-month lows. Ten-year yields were at 1.46% on Monday and have fallen from a one-year high of 1.78% in March.

Fed Chair Jerome Powell said after the U.S. central bank’s April meeting that transitory increases in inflation expected this year would not meet its standard for raising interest rates. Graphic: US PCE: https://fingfx.thomsonreuters.com/gfx/mkt/gjnpwmzwnpw/PCE.PNG

Market participants will focus on when policymakers see an increase in rates, a section of the Fed’s economic projections known as the “dot plot.”

Seven of 18 officials expected to raise rates in 2023 at the Fed’s March meeting, compared with five in December. Four officials also felt rates may need to rise as soon as next year, a change from zero as of the last projections in December.

Meanwhile, any increase in inflation projections for 2022 and 2023 may indicate that the Fed sees inflation increases being more persistent than previously expected.

Another key focus will be whether the Fed will address disruptions in cash markets by raising the interest it pays banks on excess reserves and the rate it pays on overnight reverse repos. Money market investors are struggling with a lack of high quality short-dated assets as the Treasury reduces bill issuance at the same time as banks are struggling with excess deposits, in large part from Fed bond purchases.

The Fed’s reverse repo facility, which offers approved money managers the option to lend money to the Fed overnight in return for Treasury collateral, has seen increasing demand and set a record $584 billion on Monday. Demand is expected to continue growing as the Treasury continues paring issuance of Treasury bills and the debt ceiling nears. [nL2N2NK2C2]

By raising the IOER, the Fed can ease some downward pressure on short-term rates. Some analysts say the Fed is unlikely to make any adjustments unless the fed funds rate falls below 5 basis points, a level it has so far held above. The fed funds rate was at 6 basis points on Friday. Graphic: US repo rate: https://fingfx.thomsonreuters.com/gfx/mkt/oakpebradvr/Repo%20rate.PNG

The Fed surprised some market participants when minutes from its April meeting, released in May, showed policymakers participated in a briefing on the pros and cons of making permanent the support they provide to money markets.

Investors will be looking for any details the Fed may give on a standing repo facility, which would reduce the chance of the Treasury market experiencing the sort of liquidity shortages that hit markets in September 2019 and March 2020 by giving investors confidence that there is a lender of last resort in the event of another large disruption.