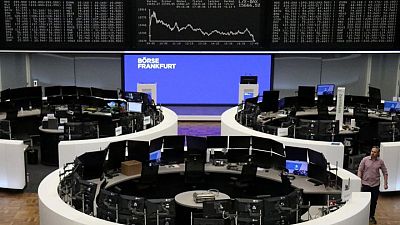 – European shares rose for an eighth straight session on Tuesday, driven by optimism over an economic recovery this year, but gains were limited as investors hunkered down ahead of the Federal Reserve’s two-day policy meeting.

The pan-European STOXX 600 ended 0.1% higher at a record closing high of 458.81 points, also marking its longest winning streak in more than two years.

Dovish signals from the European Central Bank on tightening policy have brightened the near-term outlook for risk-driven assets in the continent, along with continued hopes that a steady vaccination program will drive an economic recovery this year.

Focus this week will be on the U.S. Federal Reserve’s two-day policy meeting starting Tuesday, where investors will be looking for insight on whether the central bank has begun discussing tapering bond purchases and if policymakers are concerned about rising inflation.

“We don’t expect officials to rush into taking a decision now, (but) it would be interesting to see whether there will be a discussion around the matter, and if so, whether we will get any hints over a potential desired pace of withdrawal,” said Charalambos Pissouros, a senior market analyst at JFD Group.

“A fast pace may suggest that Fed officials do not see the surge in inflation as transitory as they did in the past and may hurt equities.”

Stronger-than-expected producer prices data in the United States raised some concerns that the Fed could signal tightening policy earlier than expected.

Investors will also be looking for inflation data from across the euro zone later this week.

Insurance stocks were among the best performing sectors for the day, while basic resources stocks tumbled, tracking a drop in base metal prices. [MET/L]

Travel and leisure stocks sank more than 2% after UK Prime Minister Boris Johnson delayed his plans to lift most remaining COVID-19 restrictions in the country.

But London’s FTSE 100 gained 0.4% as the UK posted a record jump in the number of employees on company payrolls in May as COVID-19 restrictions eased. [.L]

Polish game developer CD Projekt topped the STOXX 600 on hopes that its Cyberpunk 2077 game will be added back to Sony’s Playstation store.