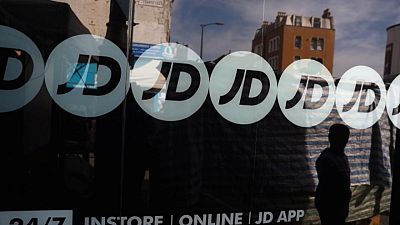 Ahead of JD’s annual shareholders’ meeting (AGM) on July 1 advisory group Glass Lewis has recommended investors vote against the company’s remuneration policy, which it regards as inappropriate.

He said furlough money from government was used to protect jobs during the COVID-19 crisis.

“The furlough receipts we used for exactly, exactly what they were prescribed for,” he told BBC radio.

He said comparing JD with companies like pure online British fashion retailer ASOS which has paid back government support money was “absolutely ridiculous”.

JD had to close its British stores during lockdown as it was classified as a non-essential retailer but was able to continue to trade online.

Cowgill, who has been executive chairman since 2004, questioned why shareholders would vote against the pay policy given he has presided over growth that has driven a market capitalisation of 9.5 billion pounds ($13.4 billion) for the FTSE 100 company.

“They (investors) may do that but … why would you when the company has progressed, it’s provided increasing levels of employment throughout, it’s expanded internationally, it’s created continued growth,” he said, adding the company’s track record was “second to none”.

Investors have become more vocal in their opposition to boardroom pay deals they deem excessive amid society’s broader struggles in the pandemic.