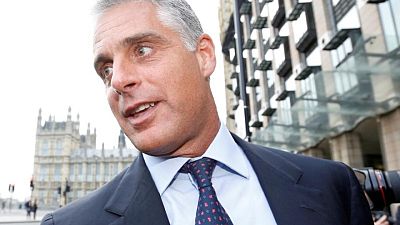 By Jesús Aguado and Emma Pinedo

MADRID – A Spanish court on Friday postponed a hearing in the dispute between Santander and Italian banker Andrea Orcel over a withdrawn offer to make him chief executive, potentially spelling a lengthy delay in the long-running case.

Santander and Orcel ended up in the Madrid court after Spain’s largest bank dropped plans to make Orcel, who was then the top investment banker at Swiss bank UBS, its CEO after a dispute over his pay package.

A source with knowledge of the matter told Reuters that the postponement, triggered by issues over remote hearings involving key witnesses, meant there could potentially be a delay of as much as six months in the high-stakes legal dispute.

The court said in a statement that a new date would be set in due course, without giving any indication of when.

The proceedings were suspended last month after a request from Orcel’s lawyer for UBS Chairman Axel Weber and Mark Shelton, head of performance and rewards at Switzerland’s biggest bank, for them to testify.

Because of issues over their remote testimonies, Santander had asked the court judge Javier Sanchez Beltran to send a so-called rogatory commission to Switzerland, another source said.

“This would mean Weber and Shelton would testify before a judge in Switzerland,” the source said, adding that this would guarantee a fair hearing under Spanish law.

This has to be done first before setting a new date for the hearing, hence a potential long delay, the first source said.

The court, Santander and Orcel’s legal team all declined to comment on the postponement and next steps in the case.

Sources have said that Weber was a key figure in the case, which involved UBS refusing to reduce a buyout payment to Orcel.

Among the witnesses still pending as in the hearing are Santander’s general secretary Jaime Perez Renovales, who signed Orcel’s original job offer, and Roberto di Bernardini, the Spanish bank’s head of human resources at the time.

The case revolves around whether a four-page letter constituted a binding contract or a non-binding initial offer.

Pay has also been an issue for Orcel at UniCredit, where last month he only narrowly defeated a shareholder revolt over his up to 7.5 million euro ($9 million) package.