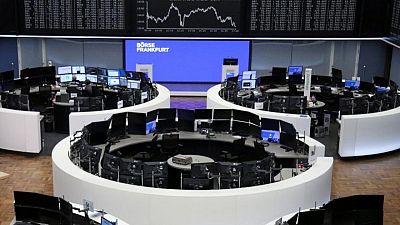 – European stocks scaled a record high on Friday, buoyed by hopes that major central banks will remain accommodative despite signs of rising inflation, while a rally in miners boosted UK shares.

The pan-European STOXX 600 index rose 0.3% in its sixth straight session of gains and was on course to end the week higher.

Miners jumped 1.2%, lifting UK’s commodity-heavy FTSE 100 by 0.6% after data showed Britain’s economic output in April was a record 27.6% larger than a year before.

Travel and leisure stocks bounced from the previous session’s drop. Spanish hotel chain Melia rose 0.7% after its chief executive forecast a return to profitability in June after 15 months in the red.

Reopening optimism has pushed Europe’s stock markets to record highs, with investors rotating into cyclical sectors such as commodities, industrials and banks that tend to benefit from an economic recovery.

The European Central Bank raised its growth and inflation projections for the euro zone on Thursday but pledged a steady flow of stimulus over the summer, easing investor concerns about an early dialling back of the bank’s support.

“Price pressures remain subdued in Europe. Even after its upwards revisions to the inflation forecasts, the ECB does not expect inflation to reach 2% within its projection horizon,” analysts at BCA Research wrote in a note.

“While the central bank will want to prepare the market for tapering by the December meeting, it will delay a decision to reduce asset purchases as much as possible.”

Euro zone government bond yields fell after the decision, weighing on banking stocks. An index of the bloc’s lenders dropped 0.5%.

Bank of America’s data showed equity funds saw tiny inflows in the week to Wednesday as investors cut positions in high-growth U.S. stocks while adding some in Europe.

French reinsurer Scor jumped 6.1% after top shareholder Covea agreed to an orderly exit from the company following a settlement over a frustrated takeover attempt and ensuing legal disputes.

Swiss computer peripheral maker Logitech and Germany’s Deutsche Bank fell more than 3% each, becoming the top drags on the STOXX 600.