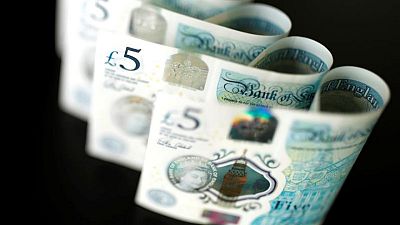 LONDON – The pound edged up slightly against the dollar on Wednesday and was steady against the euro, shrugging off post-Brexit trade issues over Northern Ireland.

Currency markets have been generally sluggish so far this week ahead of U.S. CPI data and a European Central Bank meeting, both on Thursday, which are expected to be market-moving.

Sterling-dollar implied volatility gauges with one-month maturities were at their lowest since February 2020, suggesting that market participants are not bracing for significant price-action.

Britain’s Brexit minister, David Frost, is meeting European Commission Vice President Maros Sefcovic in London on Wednesday to try to resolve the differences over trading arrangements in the British province of Northern Ireland, which remained within the European Union’s single market after Brexit due to its open land border with Ireland. [nL5N2NQ4YM]

Brussels accuses London of breaking the agreement by failing to implement checks on some goods moving from Britain to Northern Ireland and has started legal action over the British government’s unilateral extension of a grace period.

So far, months of talks have done little to break the deadlock, and Britain said on Tuesday that it would tell the EU that time is running out to find solutions.

The dispute has so far had limited impact on the pound, which rallied in the first quarter of 2021 as investors cheered the last-minute Brexit trade deal reached at the end of 2020 and largely considered sterling’s related problems to be over.

“If the relationship between the EU and the UK over this does worsen, it could be a significant headwind for sterling… but I think the market would rather ignore it,” said Jane Foley, senior FX strategist at Rabobank.

U.S. President Joe Biden departs on Wednesday for Britain where he will participate in the annual G7 summit. He will have a meeting with British Prime Minister Boris Johnson on Thursday.

Foley said that market participants were likely to continue to “gloss over” the Northern Ireland trade situation, unless Biden weighs in on the issue or if there is the suggestion that a potential UK-U.S. trade deal could be at stake.

Given the optimism about the euro zone’s economic outlook and the possible headwinds faced by Britain, the pound may struggle to break higher versus the euro in the coming weeks, Foley added.