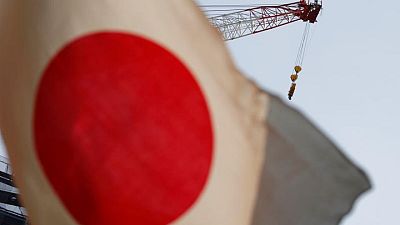 <div> <p>By Daniel Leussink and Leika Kihara</p> <p><span class="caps">TOKYO</span> -Japan’s economy shrank less than initially reported in the first quarter on smaller cuts to plant and equipment spending, but the coronavirus pandemic still dealt a huge blow to overall demand.</p> <p>Separate data showed growth in bank lending slowed sharply in May, while real wages posted the biggest monthly jump in more than a decade in April, in signs that the world’s third-largest economy was gradually overcoming last year’s pandemic hit.</p> <p>Among the mixed indicators are some reassuring signs for policymakers, who are worried Japan’s recovery will lag major economies that have rolled out <span class="caps">COVID</span>-19 vaccines much quicker and are able to reopen faster.</p> <p>The economy shrank by an annualised 3.9% in January-March, not as bad as the preliminary reading of a 5.1% contraction, but still posting the first fall in three quarters, Cabinet Office data showed Tuesday.</p> <p>The reading, which beat economists’ forecast for a 4.8% decline, equals a real quarter-on-quarter contraction of 1.0% from the prior quarter, versus a preliminary 1.3% drop.</p> <p>The revised gross domestic product (<span class="caps">GDP</span>) decline was mainly due to a smaller fall in public and capital spending, which both eased less than initially thought, offsetting a slightly larger fall in private consumption.</p> <p>“Overall, capital spending and private consumption remained weak, which showed weakness in domestic demand,” said Takeshi Minami, chief economist at Norinchukin Research Institute.</p> <p>“The vaccine issue is the most important thing for the (economic) recovery,” he said, adding that the vaccination rate would need to come to about 50% to boost economic recovery prospects.</p> <p>Capital spending shrank 1.2% from the prior quarter, better than a preliminary 1.4% decrease, and matching the median forecast for a 1.2% loss. Government consumption fell 1.1%, a smaller drop than a preliminary 1.8% decline.</p> <p>Private consumption, which makes up more than half of gross domestic product, dropped 1.5% from the previous three months, worse than the initial estimate of an 1.4% drop.</p> <p>However, Economy Minister Yasutoshi Nishimura said spending could recover as consumers return to the streets.</p> <p>“If infections subside, there’ll be pent-up demand from not having been able to go eating out or travelling,” Nishimura told reporters after the release of the data.</p> <p><span class="caps">PANDEMIC</span> <span class="caps">IMPACT</span></p> <p>Net exports – or exports minus imports – subtracted 0.2 percentage point from growth, while the hit to domestic demand pulled it down by 0.8 percentage point, not as bad as a preliminary contribution of minus 1.1 percentage point.</p> <p>The better-than-expected revision comes after household spending and exports jumped in April, though the gains were inflated largely by the comparison to last year’s deep pandemic-driven plunge.</p> <p>Total lending by Japan’s banks grew 2.9% in May from a year earlier, slowing at a record pace from a 4.8% increase in April, Bank of Japan data showed on Tuesday.</p> <p>Inflation-adjusted wages, a barometer of household purchasing power, rose 2.1% in April on a year-on-year basis, the government said.</p> <p>The bank lending slowdown was due largely to the base effect of a <span class="caps">COVID</span>-driven surge last year, while a drop in consumer prices and rebounds in overtime pay and compensation for part-time workers helped lift wages.</p> <p>Separately, Japan’s service sector index, based on a survey of workers such as taxi drivers, hotel workers and restaurant staff, fell one point from April to 38.1 in May, down for a second straight month, a Cabinet Office survey showed.</p> <p>The government has come under political pressure to water down an already stretched fiscal target this year as the cost to combat the health crisis accumulates.</p> <p>Some analysts expect Japan’s economy will contract again in the current quarter – pushing it back into a technical recession – as an extension of coronavirus emergency curbs for Tokyo and other major areas hurts domestic demand.</p> </div>