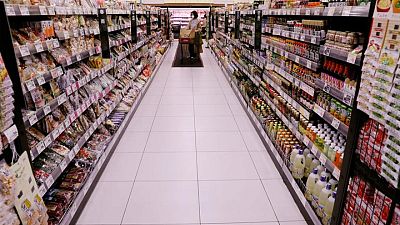 By Tetsushi Kajimoto and Daniel Leussink

TOKYO – Japan’s government will stick for the moment to its goal of achieving a primary balance surplus by fiscal year 2025, but reassess the timeframe due to the economic damage caused by COVID-19, the government’s draft fiscal blueprint shows.

The draft, seen by Reuters, underscores the government’s commitment to fixing Japan’s tattered finances. Its wording could change, however, after vetting by ruling party lawmakers, some of whom want the timeframe dropped for a second year running as the costs of combating the pandemic accumulate.

“Japan will aim to bring the primary balance into a surplus by fiscal 2025, while seeking to stably lower the country’s debt-to-GDP ratio,” the draft blueprint says.

“However, the government will reassess the timeframe by the end of the current fiscal year … taking into account the still unstable economic and fiscal situation due to the pandemic’s impact.”

The draft will be submitted to the government’s top economic council on Wednesday and formally approved by Prime Minister Yoshihide Suga’s cabinet on June 18, after scrutiny by ruling coalition lawmakers.

Japan has for years set a timeframe for bringing the primary budget, excluding new bond sales and debt servicing costs, back to a surplus in its annual fiscal blueprint.

After pushing back the target several times, the most recent pledge was to achieve a primary balance surplus by fiscal 2025, a goal that analysts had said would be a tough ask even before the pandemic led to a surge in spending.

The government was forced to omit the timeframe in the blueprint last year, when it delivered huge relief packages to cushion the economic blow from the pandemic.