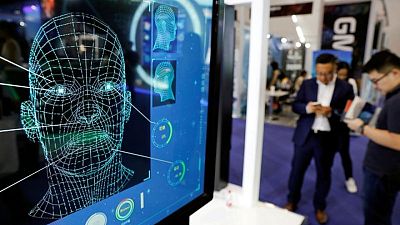 LONDON – A group of 50 investors managing more than $4.5 trillion in assets is calling on companies involved in the development and use of facial recognition technology, such as Amazon and Facebook, to do so in an ethical way.

The investor group, which is led by asset manager Candriam, a European division of U.S. financial services company New York Life, said in a statement the technology could infringe on an individual’s privacy rights, given the lack of consent of those being identified, and that there is often no official oversight.

The initiative shows how fund managers are increasingly taking up policy issues that were once considered fringe subjects for shareholders as retail investors pour billions of dollars into funds focused on ethical and sustainability criteria.

Human rights advocates say face recognition technology, which can be used to unlock smart phones or verify bank accounts, also has the potential to be used by governments to track citizens and suppress political dissent.

The investor group said it would begin a two-year process of engagement with companies developing or using the technology. It said it considers 34 companies to be leaders in facial recognition, including Amazon, Facebook, and Asian tech companies Alibaba and Huawei.

A Huawei spokesperson said: “Technology should only ever be used to enhance human, social, and environmental well-being. We encourage a global conversation to develop ethics and governance standards around emerging technologies and we continue to play our part in this conscious, ongoing, and collaborative effort.”

The other companies did not immediately comment when contacted by Reuters.

Amazon told Reuters last month it was extending a moratorium it imposed on police use of its facial recognition technology. Civil liberties groups have warned inaccurate matching could lead to unjust arrests.

“For investors to be able to fulfil our own responsibility to respect human rights, we call on companies to proactively assess, disclose, mitigate and remediate human rights risks related to their facial recognition products and services,” said Rosa van den Beemt, Responsible Investment Analyst at BMO Global Asset Management, one of the investors that has signed up to the initiative.

The facial recognition technology market is set to grow to around $10 billion in 2020, Candriam said in a report published in March, citing a 2018 survey by Allied Market Research.

“The increasing deployment and use of facial recognition technologies have human rights implications which are not fully being considered by companies,” said Louise Piffaut, Senior ESG analyst at Aviva Investors.

Candriam said there was currently no global framework governing the collection and use of biometric data, but the European Union has proposed its first ever legal framework and China has published a draft standard.

The European Union’s privacy watchdog said in April the technology should be banned in Europe because of its “deep and non-democratic intrusion” into people’s private lives.