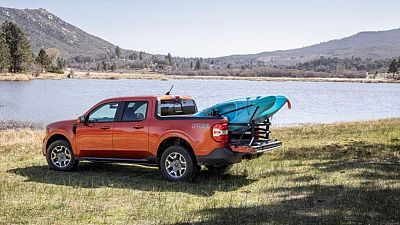 DETROIT – Ford Motor Co said on Tuesday its new Maverick compact pickup truck will have a gasoline-electric hybrid powertrain as standard equipment, a technology choice aimed at keeping the vehicle’s starting price below $20,000.

Ford expects the hybrid version of the 2022 Maverick to make up about 40% of demand when it goes on sale this fall and the technology was critical to hitting the targeted starting price, Jim Baumbick, Ford’s vice president in charge of product planning, said in an interview. A gasoline-powered engine will be sold as an option.

“We see it certainly consistent with our strategy of leaning into electrification,” he said. “Hybrid is a step and you’ve seen a lot of the work that we’re doing and all of our investments going into battery electric as kind of a continuum of improving fuel economy.”

Ford and other global automakers are racing to shift their gas-powered lineups to all electric under pressure from regions like Europe and China to cut vehicle emissions. U.S. President Joe Biden’s administration is moving to reverse former President Donald Trump’s rollback of vehicle-emission standards.

Last month, Ford boosted the money it plans to invest by 2030 on EVs by more than a third to about $30 billion and said it aimed to have 40% of its global vehicle volume all electric by then.

The No. 2 U.S. automaker also confirmed it will develop two dedicated EV platforms, one for full-size trucks and SUVs, the other for cars and smaller SUVs.

General Motors Co has said it aspires to halt U.S. sales of gas-powered passenger vehicles by 2035, and was investing $27 billion in electric and autonomous vehicles over the next five years.

Ford said there are no current plans for an electric Maverick, although IHS Markit analyst Stephanie Brinley expects it could be added down the road as Ford develops dedicated EV platforms. Maverick will use the first Ford-developed electric motor.

The hybrid version will get 40 miles per gallon in the city and offer 191 horsepower, Ford said. It did not disclose the fuel efficiency of the gas-powered model, which will have 250 horsepower.

Brinley said only time will tell whether relying on hybrids during the transition to EVs is the right move for companies like Ford and Toyota Motor Corp, but it will take a couple decades for the market to shift to all electric and in the meantime hybrids help reduce vehicle emissions.

The four-door Maverick, which will be built at Ford’s plant in Hermosillo, Mexico is meant to draw new buyers as the company’s latest entry-level vehicle. However, analysts expect the base model to be a rare sight on dealer lots, with $25,000 more likely what consumers pay after adding options.