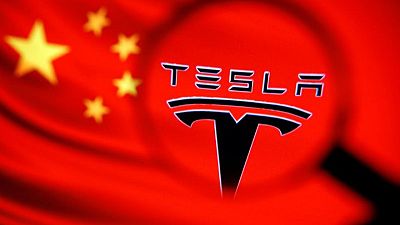 <div> <p>By Yilei Sun and Tony Munroe</p> <p><span class="caps">BEIJING</span> – Tesla Inc sold 33,463 China-made electric cars in May, including exports, a 29% jump from April, according to data from the China Passenger Car Association (<span class="caps">CPCA</span>) on Tuesday. China’s new electric vehicle sales surged 177% to 185,000 cars in May from a year earlier, <span class="caps">CPCA</span> said. Overall passenger vehicle sales, however, rose just 1.1% to 1.66 million cars.</p> <p>Tesla’s China sales – accounting for nearly a third of its total sales – is closely watched as a sign of the U.S. company’s health in its second biggest market, where the company has invested heavily and often changed its own marketing playbook to attract customers.</p> <p>Tesla, which makes its Model 3 sedans and Model Y sport-utility vehicles in Shanghai, exported 11,527 China-made vehicles in May. </p> <p>In April, it sold 25,845 China-made cars, down from 35,478 in March.</p> <p>Tesla’s Model 3 sedans were the best-selling electric vehicles in the country before they were overtaken by a much cheaper micro EV made by the joint venture between General Motors and <span class="caps">SAIC</span> Motor. The U.S. company is also facing rising competition in China from conventional EV companies such as <span class="caps">BYD</span> and startups including Nio Inc, Xpeng Inc.</p> <p><span class="caps">CPCA</span> said it expects China to sell 2.4 million electric, plug-in hybrid and hydrogen fuel cell passenger vehicles this year. </p> <p>(Graphic: EV sales in China – https://graphics.reuters.com/TESLA-<span class="caps">CHINA</span>/EV/bdwvkxzajpm/chart.png) </p> <p>Tesla is also facing scrutiny in China over its handling of customer complaints regarding quality issues.</p> <p>Last month, Reuters reported that staff at some Chinese government offices were told not to park their Tesla cars inside government compounds due to security concerns about cameras installed on the vehicles.</p> <p>In response, Tesla is trying to boost its engagement with regulators and is beefing up its government relations team, sources said. It has set up a data centre in China to store data locally and plans to open a data platform for customers.</p> <p/> </div>