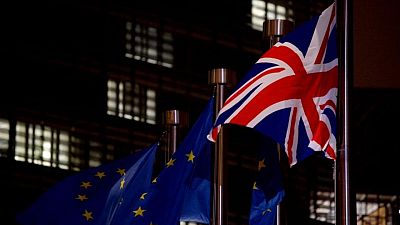 BRUSSELS – David Frost, the UK’s minister in charge of ties with the European Union, and Maros Sefkovic, vice head of the European Commission, meet on Wednesday to try and resolve differences over post-Brexit trading arrangements for Northern Ireland.

Here is an explanation of what is at stake in the talks.

THEPROTOCOL – Both the EU and Britain agreed that keeping the Northern Ireland/Ireland border open was essential to preserve the 1998 peace deal that ended three decades of violence, but argued over how to do this after Brexit.

The special arrangement, set out in a protocol, left British-ruled Northern Ireland inside the EU single market for goods, meaning it follows the rules of the bloc in this area, in particular on animal products.

As a consequence, paperwork and checks are required for certain products from mainland Britain entering Northern Ireland, to prevent it becoming a backdoor for British goods such as sausages getting into the EU.

The Northern Irish Assembly can vote after four years on whether to retain the protocol. If a simple majority votes against, it would cease to apply after a further two years.

PROBLEMS – Pro-British unionists say the protocol undermines peace by dividing them from the rest of the UK with an effective border in the Irish Sea. The discontent helped fuel the worst violence in the region for years in March and April. There are fears it could spike again during the “marching season” in July.

London points to practical problems, saying checks severely hamper supplies to Northern Irish supermarkets. In March, the British government unilaterally extended a grace period for parcels crossing the Irish Sea and for export health certificates to show that animal products meet EU rules. They were to have expired on April 1, but now run until October.

On July 1, another grace period will end for “chilled meat products”, such as non-frozen sausages or mince, which are banned coming from a third country under EU food safety rules.

EU, UK AT ODDS – The EU says there is an easy fix to these problems. Britain should align with EU food safety rules, at least temporarily, until trade deals with other countries make Britain diverge. EU officials say such a move would remove 80% of the checks on British goods arriving in Northern Ireland.

Britain says this is a non-starter, given that a major reason for Brexit was to free itself from Brussels rules. It has proposed a veterinary deal under which each side would recognise the other’s standards as equivalent, pointing to an existing EU-New Zealand agreement to reduce checks and minimise paperwork. Brussels says a veterinary deal can only be limited.

London has also suggested taking a “common sense” risk-based approach that would assess whether particular allowances do in fact pose a threat. Officials cite pets as one example.

LEGALCHALLENGES – The European Commission launched legal action in March over Britain’s extension of the grace periods and says that if London fails to enter consultations “in good faith” it could seek binding arbitration.

A finding in its favour could prompt financial sanctions and, in the case of non-payment or non-compliance, the EU could impose tariffs on certain UK exports. Under the post-Brexit trade agreement between the EU and the UK, goods trade is tariff and quota-free.

EU FLEXIBILITY? – Britain accuses the EU of “legal purism”, but EU officials point to a number of ways in which it is taking a flexible approach.

They say the EU is open to a freer flow of medicines into Northern Ireland from Britain and could also allow travel across the Irish Sea of guide dogs and second-hand cars and easier movement of livestock. The EU says it is pushing connection of EU and UK IT systems work to allow swifter processing of agri-food and could be flexible on steel quotas for Northern Ireland.