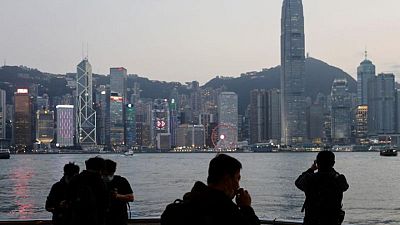 <div> <p> – Asian firms have received the biggest upgrade to their forward 12-month earnings estimates in six months, bolstered by a surge in regional manufacturing and exports as a recovery in global demand continues, data from Refinitiv shows. </p> <p>Analysts lifted their forecasts for Asian companies’ forward 12-month earnings by 3.9% in May, the highest since November last year, according to the data.</p> <p>“Earnings recovery remains a dominant theme despite risks of rolling <span class="caps">COVID</span> waves ahead aided by strengthening of vaccine rollouts in more developed parts of Asia,” Nomura said in a report at the end of last month.</p> <p>The recovery was being driven by sectors where structural themes underpinned earnings such as semiconductors, electric vehicles, internet/e-commerce and gaming, the bank said.</p> <p/> <p>(Graphic: <span class="caps">MSCI</span> Asia-Pacific index’s estimates change – https://fingfx.thomsonreuters.com/gfx/mkt/xlbpgkozdpq/MSCI%20Asia-Pacific%20index’s%20estimates%20change.jpg)</p> <p/> <p>Asian companies posted higher-than-expected profits in the first quarter, prompting analysts to revise their forecasts higher for the year. </p> <p>Goldman Sachs said regional firms’ first-quarter earnings grew 70% last year, while their median earnings surprise was the highest in a decade at 12%. </p> <p>Taiwanese companies saw the biggest earnings upgrades of 5.9% in the past month, while Indian firms’ were lifted by 3.5% after a cut in April as a second wave of the pandemic took hold.</p> <p/> <p>(Graphic: Breakdown by country for estimates changes in last 30 days – https://fingfx.thomsonreuters.com/gfx/mkt/rlgpddlabpo/Breakdown%20by%20country%20for%20estimates%20changes%20in%20last%2030%20days.jpg)</p> <p/> <p>“India might see selected pockets of strength despite concerns around surging <span class="caps">COVID</span>-19 cases as manufacturing activity remained stable, while sectors such as information technology reported strong earnings results,” said Goldman Sachs in a report last month.</p> <p>“Although consumer-facing sectors could see some headwinds.” </p> <p>India’s daily coronavirus cases have, however, been declining in recent weeks, and its vaccination drive has accelerated after a slow start. </p> <p>South Korea, Vietnam, Singapore, and Australia, all saw earnings upgrades of more than 2% in the last month, while the Philippines and China received small downgrades.</p> <p/> <p>(Graphic: Breakdown by sector for estimates changes in last 30 days – https://fingfx.thomsonreuters.com/gfx/mkt/xegvbrmqxvq/Breakdown%20by%20sector%20for%20estimates%20changes%20in%20last%2030%20days.jpg)</p> <p/> </div>