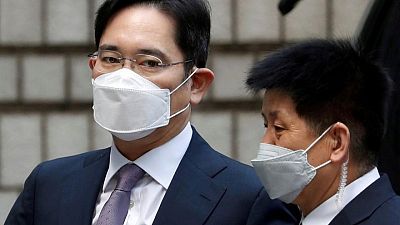 <div> <p><span class="caps">SEOUL</span> – South Korean prosecutors are seeking a 50 million won ($45,000) fine for Samsung Electronics vice chairman Jay Y. Lee over an allegation of unlawful use of a prescription sedative, a source with knowledge of the matter said on Friday. </p> <p>The Seoul Central District Prosecutors’ Office deemed it a summary indictment, it said in a statement, applicable for less serious offences for which hearings are not held. </p> <p>The office declined to confirm the amount of the fine. </p> <p>The source declined to be identified. </p> <p>Lee’s counsel said the medication was not unlawful as it was part of a doctor’s treatment in hospital, and it would carefully review the matter before deciding how to respond. </p> <p>A South Korean independent panel recommended in March that prosecutors cease investigating Lee over allegations that he had been routinely administered an anaesthetic at a clinic. </p> <p>Lee has been detained on a separate bribery charge since January and is undergoing another trial on allegations including stock manipulation. </p> <p>($1 = 1,115.29 won)</p> <p/> </div>