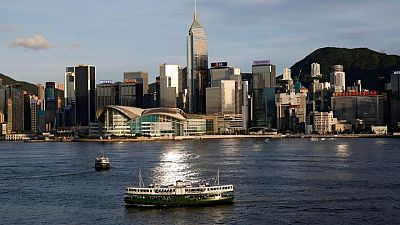 <div> <p>By Scott Murdoch, Alun John and Kane Wu</p> <p><span class="caps">HONG</span> <span class="caps">KONG</span> – Some global banks, funds and other financial services providers say they are stepping up hiring in Hong Kong, in a sign the city’s unique position as a financial gateway to China is outweighing concerns about Beijing’s tightening grip over it. </p> <p>Goldman Sachs Group Inc, Citigroup Inc, <span class="caps">UBS</span> AG and other banks are each hiring hundreds of people in the city this year, adding substantially to their existing ranks.</p> <p>Citigroup, for example, has said it is bulking up its staffing by 1,500 people, including additional headcount and replacements in 2021, double the number of people it hired a year ago. </p> <p>It has about 4,000 people in the city. A Goldman spokesman said the bank, which has about 2,000 people in Greater China, expects hiring in Hong Kong to be up 20% this year.</p> <p>The Securities and Futures Commission, Hong Kong’s market regulator, is seeing a rebound in licenses it issues for people involved in asset management, securities and other financial activities, according to data on its website.</p> <p>The total number of licenses it issued was up 1.7% at the end of March, compared with nine months earlier, and just shy of an all-time peak in 2019. </p> <p>“Hong Kong has some unique advantages, and it will remain the gateway for many of our local and global clients to access China,” said Kaleem Rizvi, Head of Citi’s Asia-Pacific corporate bank. </p> <p>Many financial companies slowed hiring last year, after protests against Chinese rule and a new security law imposed on the city to crush dissent by Beijing, as well as the coronavirus pandemic, six bankers, recruiters and other industry executives said. </p> <p>The increased hiring plans of some major players show that they are now willing to live with the political risks. </p> <p>“Everyone in the business community I have spoken with welcomes the peace and stability now, compared with the chaos of 2019,” said Weijian Shan, chairman and chief executive of Hong Kong-based private equity group <span class="caps">PAG</span>. </p> <p>To be sure, politics remains contentious and unsettling for some finance professionals, some bankers have said. Some expatriate financial workers have left or considered leaving Hong Kong, along with thousands of residents of the former British colony.</p> <p>Hong Kong police have asked some banks to hand over account details of opposition activists and politicians arrested under a stringent national security law imposed by Beijing, and the government has threatened jail time for bankers handling assets belonging to media tycoon Jimmy Lai frozen under the new law. </p> <p>Hong Kong’s financial regulators declined to comment on banks’ hiring plans or some bankers’ disquiet about the political tightening.</p> <p/> <p><span class="caps">CLOSE</span> TO <span class="caps">CHINA</span> </p> <p>Bankers and other financial services professionals interviewed by Reuters said much of the lure of being in Hong Kong comes from the city’s close ties to China and the business it brings. </p> <p>That business is booming. Flows via the stock connect schemes linking Hong Kong with the Shanghai and Shenzhen exchanges rose to record highs in the first quarter of 2021.</p> <p>Companies, mostly from mainland China, raised more money through Hong Kong listings in the first five months of this year than they did in the same period of the last four years combined, Refinitiv data shows. </p> <p>Mergers and acquisitions in Greater China are the highest since 2018. </p> <p>Anthony Fasso, Asia Pacific chief executive of global asset manager PineBridge Investments, said Hong Kong was adapting to the new realities. </p> <p>“We believe that Hong Kong will remain a globally competitive international city at the doorstep of one of the largest and fastest growing economies in the world,” Fasso said.</p> <p/> <p><span class="caps">HIRING</span> <span class="caps">SPREE</span> </p> <p>Besides Goldman and Citigroup, Swiss bank <span class="caps">UBS</span> hired 200 people in the year through March, which consisted of 20 new full-time staff compared to seven in the previously financial year, a spokesman said. </p> <p>The bank took on 100 contractors and 80 graduates in the year to March. It was the highest number of graduate recruits to join <span class="caps">UBS</span> in more than 10 years. The bank has 2,500 people based in Hong Kong. </p> <p><span class="caps">HSBC</span> Holdings Plc has said it plans to add 400 staff in Hong Kong this year, part of its plan to recruit 5,000 people in the next five years in the region to wealth management in Asia. </p> <p>Lok Yim, Hong Kong chief executive of Deutsche Bank AG, said the German bank was also planning on making further strategic hires, after a first quarter that had been its strongest in years. </p> <p>“We are probably two to three times as busy now as we were late last year,” said Olga Yung, regional director at recruitment firm Michael Page in Hong Kong. </p> <p/> </div>