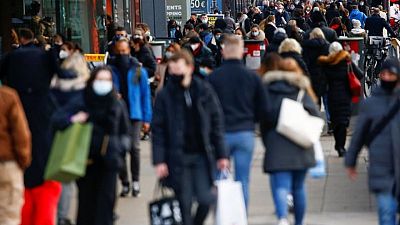 <div> <p><span class="caps">BRUSSELS</span> – Euro zone retail sales fell more than expected in April, dragged down by a decline in sales of non-food products, but were still much higher than 12 months earlier when most countries were under strict pandemic lockdowns, data showed on Friday.</p> <p>The European Union’s statistics office Eurostat said retail sales in the 19 countries sharing the euro fell 3.1% month-on-month in April but were 23.9% higher than a year earlier.</p> <p>Economists polled by Reuters had expected only a 1.2% monthly fall and forecast a 25.5% year-on-year surge.</p> <p>Eurostat said sales of non-food products, excluding fuel for cars, plunged 5.1% on the month though were a 42.6% higher than in April 2020. Sales of automotive fuel were 0.4% higher on the month and a massive 65.5% higher year-on-year.</p> <p>Retail sales are seen as a proxy indicator for consumer demand. That is in turn key for trends in inflation, which the European Central Bank wants to keep below but close to 2% over the medium term. It already reached 2% in May and is likely to move higher, even if only temporarily, this year.</p> <p/> </div>