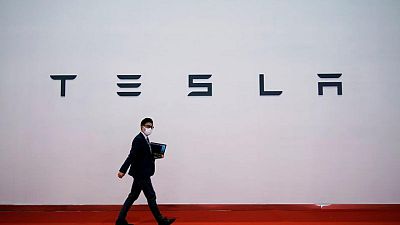 – Tesla Inc’s vehicle orders in China nearly halved in May from April, against the backdrop of increased government scrutiny on the U.S. electric carmaker, the Information reported on Thursday, citing internal data.

The company’s monthly net orders in China dropped to about 9,800 in May from more than 18,000 in April, the report https://bit.ly/3phOPE4 said, sending shares down nearly 5% in afternoon trading.

Tesla did not immediately respond to a request from Reuters for comment.

China is the electric car maker’s second-biggest market after the United States and accounts for about 30% of its sales. Tesla makes electric Model 3 sedans and Model Y sport-utility vehicles in a Shanghai plant.

Tesla had won strong backing from Shanghai when it built its first overseas factory there in 2019. Tesla’s Model 3 sedans were the best-selling electric vehicles in the country before they were overtaken by a much cheaper micro EV made by the joint venture between General Motors and SAIC Motor. [nL1N2M61I4]

But the U.S. company is now facing scrutiny over its handling of customer complaints over quality issues.

Last month, Reuters reported that staff at some Chinese government offices have been told not to park their Tesla cars inside government compounds due to security concerns over cameras installed on the vehicles.[nL3N2N80IE]

In response, Tesla is trying to boost its engagement with mainland regulators and is beefing up its government relations team, sources have told Reuters. It has set up a data centre in China to store data locally and plans to open a data platform for customers.

Tesla sold 11,671 Model 3 and Model Y vehicles in April in China compared with March, when it sold most of its 35,478 China-made cars locally, according to Chinese auto industry body CPCA.