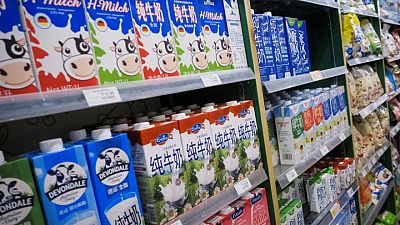 BEIJING – China has come to crave milk. Demand that had been steadily growing has spiked further after doctors touted its health benefits amid the coronavirus pandemic and dairy firms across the country have embarked on a farm-building frenzy.

But quenching that thirst will be problematic, not least because finding the millions more cows needed for planned new and expanded farms will be challenging.

China is the world’s third-largest milk producer, but last year’s 34 million tonnes of output only met about 70% of domestic needs. Complicating matters are feed costs at multi-year highs, while land and water are also in short supply, making the country a costly place to produce milk.

Spurred on by near record highs for raw milk prices and government subsidies, just over 200 new Chinese dairy farm projects were announced last year, according to consultancy Beijing Orient Dairy.

Its analysis shows that 60% of the new projects have set their sights on 10,000-plus cows and in total the plans call for some 2.5 million cows – roughly half of China’s current milking herd – to be added in the coming years.

On the face of it, China’s dairy market, worth some $62 billion in annual sales, is ripe for development. The government has heavily promoted milk and its benefits – in part to support the rural dairy industry – boosting consumption. Even so annual per capita intake is only 6.8 litres compared to 50 litres for the United States, according to Euromonitor International.

Milk in China is, however, still considered special enough to be a popular gift. Fresh milk costs about $2 a litre, roughly double UK and U.S. prices, while the more common 240 ml packs of room temperature UHT milk cost about 40 cents.

Demand for fresh chilled milk especially, which constitutes just a fifth of milk sales in China, has shown rapid growth, climbing 21% in the first 11 months of 2020 versus 10.9% for room-temperature milk, according to Nielsen data.

Firms outlining grand plans include Modern Dairy, which wants to double its herd over the next five years to 500,000 by buying up smaller farming companies and building new farms.

According to Beijing Orient Dairy, new Chinese farms needing a total of 1.35 million cows are already under construction, but some of those will have to sit empty.

It estimates that over the next two years, China’s domestic herd will generate about 500,000 new heifers while imports could come in at around 400,000 if the pace of imports stays the same as last year when China imported almost 200,000 heifers, mostly from Australia and New Zealand.

Importing heifers is the fastest way to stock a new farm, shaving about a year off the time it would take to breed the stock at home. Imports are also preferred as the cattle are free from the many diseases circulating in China’s herd.

But clouding that outlook has been New Zealand’s decision in April to halt live cattle exports within two years due to concerns about the welfare of livestock on ships for long periods.

“We have been inundated with inquiries, especially as New Zealand stops the trade,” said an Australian cattle exporter who declined to be identified, adding that the surging demand from China is encouraging graziers to spend more on breeding.

“If we just added two more import countries, we’d be fine,” he said.

China and the United States pledged to start talks on imports of breeder cattle within a month of the Phase 1 trade deal signed in Jan. 2020 but it remains unclear if the discussions have begun.

The office of the U.S. Trade Representative, China’s Ministry of Commerce and General Administration of Customs did not respond to requests for comment.

Corn prices are at record levels, while hay/grass is also set to become more expensive as it competes for acres with corn, said Grant Beadles, China manager at Land O Lakes, which supplies feed and forage seed to the market.