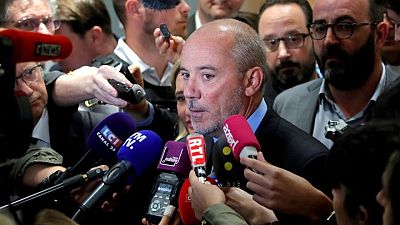 <div> <p><span class="caps">PARIS</span> – A French prosecutor on Wednesday told judges of the Paris appeals court that Orange’s boss Stephane Richard should face three years in jail for his alleged involvement in a disputed compensation payment made by the state in 2008, a spokesman for Richard said. </p> <p>The prosecutor’s penalties, which also include a 100,000-euro fine as well as the prohibition from voting or holding a public office for five years, are similar to the ones pronounced two years ago in a first fraud trial that ended with Richard being cleared of any wrongdoing. </p> <p>The prosecutor added that 24 months of the three-year prison sentence should be suspended. </p> <p>The judges will hear the pleadings of Richard’s lawyers and others from next week. No date has been set yet for the court’s decision. </p> <p>Richard has denied the allegations, saying he was doing his job and only played a secondary role in the arbitration process in which French tycoon Bernard Tapie was awarded 403 million euros ($491.62 million) in the state-funded settlement.</p> <p>Tapie, 78, did not attend most of hearings of the appeals trial as he suffers from cancer. </p> <p>The former businessman and minister of Socialist President Francois Mitterrand in the early 1990s is locked in a fight over the sale of his stake in sportswear firm Adidas in 1993 to Credit Lyonnais, then government-owned, and the compensation he won over the transaction 15 years later.</p> <p>Richard is accused of complicity in the disputed payment. He was working as chief of staff to then-finance minister Christine Lagarde when it was made.</p> <p>($1 = 0.8923 euro)</p> <p/> </div>