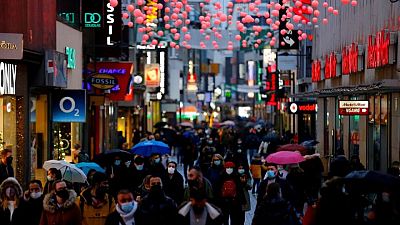 BERLIN – Germany is monitoring a recent rise in inflation closely but the government shares the assessment of central banks that the jump in consumer prices is largely driven by temporary factors, Finance Minister Olaf Scholz told Reuters on Wednesday.

Asked if the jump in inflation and the European Central Bank’s ultra-loose monetary policy could become a problem for Germany, Scholz said: “We’re always looking closely at this. But so far, there is much to suggest that the assessment of the central banks is correct.”

“We can now also hope for a decent upswing in the economy, where we are gradually leaving the pandemic behind us,” Scholz added. “It will also be possible for us to do even better than we can currently forecast.”

Economy Minister Peter Altmaier said on Tuesday the German economy, Europe’s largest, should grow by between 3.4% and 3.7% this year, offering a more upbeat outlook than when the government raised its forecast at the end of April.

The recovery is bringing with it concerns about inflation.

Germany’s annual consumer price inflation accelerated in May, advancing further above the ECB’s target of close to but below 2%, the Federal Statistics Office said on Monday.

Bavaria’s finance minister, Albert Fueracker, told daily Bild in comments published on Wednesday that higher inflation is compounding the plight of savers and the European Central Bank should respond by raising its interest rates from 0%.

“In combination with the now rising inflation, the expropriation for savers is becoming more and more noticeable. Bavaria has been warning for years that the zero interest rate policy must be ended – now it is high time,” he said.

Conservative Germans have long complained that the ECB’s 0% interest rates hurt savers as they are left with little if any gain – a problem compounded by rising inflation eroding the value of their nest eggs.

Monday’s price figures for May showed a national measure of inflation rose to 2.5%, the highest level since 2011.