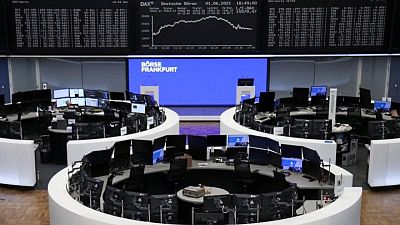 -European stocks stayed near record levels on Wednesday, helped by energy and consumer stocks, while strong economic data from the United States and Europe buoyed investor sentiment in a mostly quiet day of trading.

Data showing a strong expansion in U.S. and European factory activity in May lifted world shares to fresh highs on Tuesday, with investors awaiting U.S. jobs data on Friday for confirmation of a solid recovery in the world’s largest economy.

Oil and gas stocks rose 0.9% to lead sectoral gains in Europe as crude prices extended gains after OPEC and its allies stuck to their plan to cautiously bring back supply to the markets in June and July. [O/R]

Stocks considered more stable at times of market uncertainty – such as food and beverage and real estate <.SX86P> – also found favour, while tech and miners gained.

“But overall indices remain in solid form, and have started June on the right foot after holding their ground in a less-than-exciting May.”

Worries about rising inflation triggered a bout of volatility in markets in May. However, investors have taken comfort from reassurances from the U.S. Federal Reserve and European Central Bank policymakers about the price rise being transitory.

“Central banks face a balancing act in preparing markets for an unwinding of emergency measures. We expect this to happen in a controlled fashion over the summer, though we acknowledge the risk of communication accidents amid overheating concerns in the U.S.,” analysts at Generali Investments said in a note.

Data on Tuesday showed euro zone inflation accelerated to 2% in May from 1.6% in April, driven by higher energy costs to above the ECB’s aim of “below but close to 2%”.

Swedish truckmaker Volvo rose 3.5% as its board proposed that the proceeds from the sale of UD Trucks be distributed to shareholders.

German broadcaster ProsiebenSat.1 Media slipped 4.2% after Chief Executive Officer Rainer Beaujean said it “does not need any help from outside” amid calls to consolidate the European broadcasting industry.