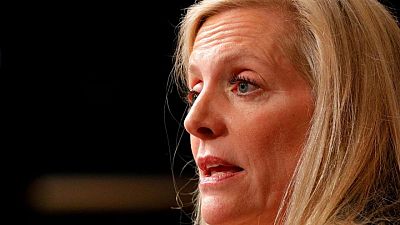 <div> <p>By Howard Schneider and Ann Saphir</p> <p><span class="caps">WASHINGTON</span> – The United States is getting closer to the Fed’s maximum employment and 2% inflation goals, Fed Governor Lael Brainard said on Tuesday, but the depth of the remaining problem still requires the central bank to stick to its super-easy monetary policy until more progress is seen. </p> <p>“While we are far from our goals today, we are seeing welcome progress, and I expect to see further progress,” Brainard told the Economic Club of New York. But “jobs are down by between 8 and 10 million compared with the level we would have seen in the absence of the pandemic. And it will be important to see sustained progress on inflation,” not just a temporary jump. </p> <p>Some of the factors fueling current strong growth, including fiscal spending and the rush by households to take advantage of a broader economic reopening, are likely to fade over time, Brainard noted, another reason the Fed should not pull back too soon.</p> <p>“Remaining steady in our outcomes-based approach during the transitory reopening surge will help ensure the economic momentum that will be needed,” to make sure inflation hits and stays at the Fed’s target, and people have as much time as possible to restart their old jobs or find new ones, she said. </p> <p>The Fed is approaching a critical few months as it tries to read an economy progressing through the unparalleled moment of restarting after a pandemic. </p> <p>What are difficult judgments in normal times — assessing the path of inflation or figuring out what employment metrics are most meaningful — have become even more complex in an environment where spending and work patterns have been upended, potentially permanently, by the historic health crisis.</p> <p>How those questions are resolved will determine when the Fed begins to reduce its $120 billion in monthly bond purchases, and then eventually raises interest rates from the current near-zero level.</p> <p>Brainard has been among the stronger voices at the Fed arguing to wait on any policy change to be sure the recovery won’t slip, but on Tuesday did not repeat her previous calls for the Fed to be “patient,” a word often used to push policy debates far down the road. </p> <p>Instead she said several times the Fed would remain “steady,” a subtle change that may signal an important shift. </p> <p>“Steady means you are not getting too flustered but that you are willing to kind of recalibrate a little bit,” said <span class="caps">JPM</span>organ economist Michael Feroli, who interviewed Brainard after her remarks. He added that “steady” likely signals a shorter horizon before any potential policy adjustments than “patient” did. </p> <p>Remarks from other Fed policymakers in recent weeks have signaled the debate over tapering the Fed’s bond-buying is underway. One item in particular focus is whether the Fed might start by reducing its purchases of mortgage-backed securities, given the rapid rise in housing prices fueled in part by easy financial conditions. </p> <p>Brainard on Tuesday gave no signal she’d support such a move. But neither did she push back on the idea of tapering overall. </p> <p>When Feroli asked Brainard about how much notice the Fed planned to give markets before beginning to trim bond purchases, she noted that the Fed had described discussions of tapering in the minutes of its April meeting and that such transparency is part of the advance notice the Fed has promised. </p> <p>“It didn’t sound like she’s fighting” the taper talk, Feroli said afterwards. </p> <p>A key bit of information in the coming taper debate will come on Friday when new employment data will show whether hiring picked up in May after a weaker-than-expected April.</p> <p>Another poor outcome won’t necessarily dim faith in the recovery, only emphasize how hard it is to restart a $20 trillion economy.</p> <p>Brainard on Tuesday said the fact that prices are currently being driven higher by things like unexpected computer chip shortages and a rush by consumers to buy used cars is all the more reason to wait on a policy change, as is the uncertainty over why people seem hesitant to take jobs. </p> <p>Some of that data “noise” will ease by the fall, Brainard said. </p> <p>She said she would be “attentive” to signs of higher inflation, but she cautioned also against “pre-emptive tightening” that could deprive people of jobs.</p> <p/> </div>