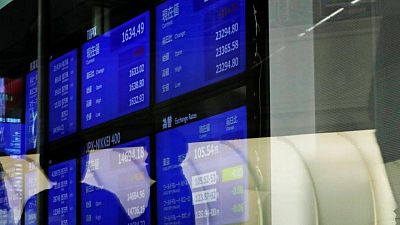 WASHINGTON – Global equities set both an intraday high and record close on Tuesday as markets as investors weighed the latest U.S. economic data for signs of a rebound and rising inflation while Wall Street’s main indexes wavered before ending little changed.

Energy shares were among the best performing during the session as the OPEC+ alliance agreed to hike output in July and gave a bullish forecast. U.S. crude futures rose to their highest in more than two years. The dollar ended little changed, while Treasures, gold and bitcoin slipped. Financial shares countered declines in healthcare.

“The major equity market indices may have finished the day roughly unchanged, but look no further than energy and oil markets for evidence that the reopening trade is alive and well,” said Elyse Ausenbaugh, a global market strategist and JPMorgan Private Bank.

Investors cheered signs of an improving economy ahead of a week packed with major data they hope to cast light on the economic recovery, analysts said.

U.S. manufacturing activity picked up in May, the Institute for Supply Management (ISM) said on Tuesday, as its index of national factory activity increased to a reading of 61.2 last month from 60.7 in April. Pent-up demand amid a reopening economy has boosted orders, but unfinished work has piled up because of shortages of raw materials and labour.

“They are interpreting higher yields as a signal to sell technology holdings and buy cyclical companies in the Energy, Materials and Financials sector,” Zaccarelli said.

The Organization of the Petroleum Exporting Countries and its allies agreed to stick to the existing pace of gradually easing supply curbs through July. Meanwhile, Americans escaped their pandemic doldrums over this past three-day holiday weekend, taking to the skies and roads and spurring hopes for a recovery in U.S. fuel demand.

“Memorial Day just brought the Transportation Security Administration’s busiest day since the start of the pandemic, and data from GasBuddy suggested that we saw the highest Sunday demand for gasoline in the U.S. since the summer of 2019,” added Ausenbaugh of JP Morgan Private Bank.

This week’s main event is Friday’s U.S. payrolls data, with markets looking for a signal from the Federal Reserve on when it will start tapering its bond-buying programme. Median forecasts are that 650,000 jobs were added in May, but the outcome is uncertain following April’s unexpectedly weak 266,000 gain.

Though U.S. inflation data last week exceeded estimates, another big miss on the jobs front would delay prospects for any wind-down of stimulus, analysts say.

Concerns about global inflation have driven gold up 8% this month to comfortably above $1,900.