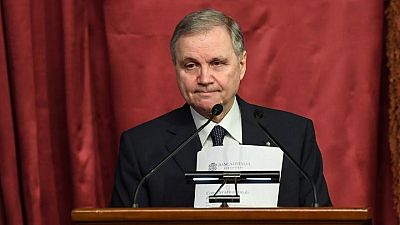 By Giselda Vagnoni and Giuseppe Fonte

ROME -Economic recovery prospects in the euro zone remain uncertain and the European Central Bank will counter any strong rises in interest rates that are not justified by economic conditions, governing council member Ignazio Visco said on Monday.

Visco, the governor of the Bank of Italy, said in an annual keynote speech in Rome that the 2008-2009 financial crisis had shown the risks of premature withdrawal of monetary stimulus.

In the current situation “uncertainty over the timing and the strength of the recovery require that financial conditions remain supportive for a long time,” he said.

“Large and persistent rises in interest rates are not justified by the current economic prospects and will be countered,” Visco said, adding that the ECB was ready to make “full use of its already defined bond-buying programme”.

Euro zone bond yields rose sharply earlier this month, driven by a brighter economic outlook, but have come off highs following comments by ECB policymakers, including President Christine Lagarde, that it is too soon to remove central bank support.

In an interview with Reuters after his speech, the central banker said he was pleased to see euro zone inflation rising, but the increase was driven by energy and one-off factors, and in any case inflation remained too low.

“We are still are far away from the objective that we have of medium term inflation close to 2%,” he said.

In his speech, Visco called for a change in ECB’s reference level of below but close to 2%. He said it would be “clearer” to introduce a target of 2% in which overshoots and undershoots were treated symmetrically.

This would “reinforce the anchoring of medium and long-term inflation expectations”.

Turning to fiscal policy, Visco repeated previous calls for a common European Union budget and said the EU’s 750-billion-euro ($917 billion) Recovery Fund should pave the way for the bloc to issue common debt in a stable way.

This would “increase the effectiveness of monetary policy and allow the euro to fully take on the role of an international currency”.

The proposal is likely to meet resistance among so-called “frugal” northern European countries, and Visco stressed a common debt instrument would have no impact on previously issued debt, which would remain the responsibility of each country.

Bundesbank President Jens Weidmann has said common debt issued under the Recovery Fund should be a one-off exercise.

Visco told Reuters the decision lay with politicians, and neither Weidmann’s position nor his own should be seen as those of their respective countries.

Nonetheless, many studies suggested the lack of a common fiscal capacity had been “crucial” in exacerbating the effect of the global financial crisis, he said.

Italy is eligible for more than 200 billion euros of the Recovery Fund kitty, making it the bloc’s largest recipient provided it can fulfil commitments for infrastructure investments and economic reforms over the next five years.

This represents “a formidable challenge,” Visco said in his speech.

Turning to the domestic economy, the central bank chief said several Italian banks, mainly small ones, had structural weaknesses and should “urgently” reconsider their business model. Any bank failures will be handled trying to ensure that the lenders “exit the market in the most orderly way possible”.

The ECB’s stress tests of banks across the euro zone this summer are unlikely to throw up surprises, Visco told Reuters, but he added that lenders that fare poorly will need to take action.