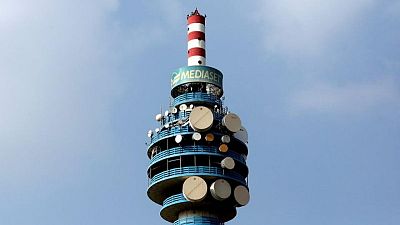 MILAN – Mediaset shareholders on Thursday agreed to ditch a loyalty share scheme at the Italian broadcaster as part of a wider agreement struck earlier in May to end a years-long dispute with its second-largest investor, French media group Vivendi.

Mediaset had proposed to axe the scheme, which rewards long-term investors with additional votes and would have strengthened the grip on the company by its top investor, the family of former Prime Minister Silvio Berlusconi, in a sign of goodwill towards Vivendi, which had challenged the measure in court.

All shareholders present at a virtual meeting voted in favour of scrapping the scheme, a source familiar with the matter said.

Earlier this month Mediaset and Vivendi ended years of legal sparring with an accord under which the French group will drastically cut its stake in Italy’s top commercial broadcaster.

Under that accord, Vivendi also agreed to back a separate proposal to move Mediaset’s legal headquarters to the Netherlands, seen as key to pursue international expansion to tackle rising competition from streaming services such as Netflix and Amazon Prime.

The move will be put to a shareholder vote on June 23.

Mediaset was previously forced to shelve plans to set up a Dutch holding company and put its European expansion plans on hold because of opposition from Vivendi after a collapsed pay-TV deal back in 2016 plunged the two media companies into a bitter war waged in courts across Europe.

Following a string of favourable court rulings, Vivendi recovered full voting rights on its 29% stake in Mediaset, making its backing essential for Mediaset to push through any extraordinary moves, including the loyalty scheme or the change of the legal base.