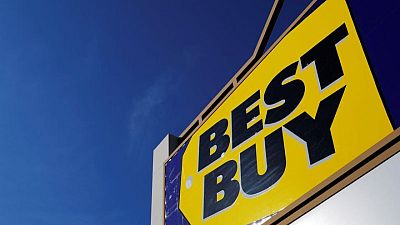 -Best Buy Co Inc raised its annual sales forecast on Thursday, saying the latest round of stimulus checks had kept consumers buying home electronics, while acknowledging that a reopening economy threatens to slow growth later in the year.

Shares of the retailer, which also raised its fiscal 2022 share buyback forecast by $500 million to $2.5 billion, rose 4% in premarket trading.

Best Buy was among the biggest retail winners during most of the health crisis as stuck-at-home Americans set up remote workspaces and invested in home appliances leading to a surge in sales of laptops, washing machines, refrigerators and other electronics.

The company forecast second-quarter comparable sales to rise 17%, compared with analysts’ average estimate of a 5.8% increase, according to IBES data from Refinitiv.

Best Buy expects full-year comparable sales to rise 3% to 6%, compared to a previous forecast range of a fall of 2% to a rise of 1%.

However, the company said it still expects comparable sales in the second half of its fiscal year to fall as consumers switch to spending more on activities such as eating out, traveling and other social events.

Comparable sales rose 37.2% in the first quarter ended May 1 beating analysts’ estimates of a 22.7% increase. Sales of appliances jumped 66.6%.