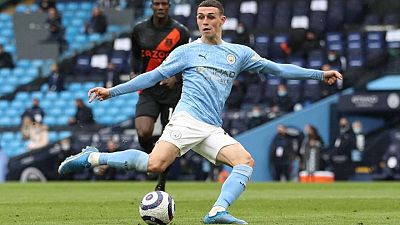 LONDON (Reuters) – The biggest compliment that could be paid to Phil Foden is that he has stepped into the boots of Spanish wizard David Silva at Manchester City and assumed the role of Pep Guardiola’s creative spark with apparent ease.

For a player who does not even turn 21 until the end of the month that is some achievement, given the mercurial Silva’s standing at City and across the world.

Foden, tipped for greatness from the moment he helped England win the Under-17 World Cup in 2017, has become an integral part of City’s attack.

This season, with Silva having departed, Foden has arguably been City’s key player in a season in which they regained the Premier League title and won the League Cup as well as reaching the Champions League final against Chelsea.

While England manager Gareth Southgate has a plethora of gifted attacking players that would be the envy of many of his predecessors, Foden looks like the one who could provide the X-factor at Euro 2020.

Blessed with silky technical skills, vision, anticipation and an eye for goal, Foden offers Southgate several options, either wide in a three-pronged attack, a more orthodox central midfield role or even as a “false nine”.

Guardiola rates him so highly that he believes Foden will one day become one of the world’s best holding midfielders.

“We cannot lose or waste this incredible quality, it is so difficult to find the quality that he has.”

Southgate can thank Guardiola for polishing Foden into the kind of player with the potential to provide the magic ingredient for England to triumph this summer.

Foden only has six full England caps to his name but he has made a strong case to be in the starting line-up when England face Croatia in their opening group game at Wembley on June 13, preferably in a 4-3-3 system.

While opposing teams will be familiar with the threat posed by the likes of Harry Kane, Raheem Sterling and Marcus Rashford, Foden offers danger in a multitude of scenarios and the idea of him playing behind that trio is enticing.

Southgate will need to be bold in his attacking selections if England are to prosper in a tournament in which the margins between success and failure will be tiny.

But he is clearly a big fan of Foden, who many predict could have the same impact at Euro 2020 as Southgate’s old team mate Paul Gascoigne did at the 1990 World Cup.

“He’s intelligent in his positioning, his skills to receive under pressure and the movement for his body to take players out of the game, his tight control. He’s got a lovely range of passing and a disguised pass,” Southgate said.